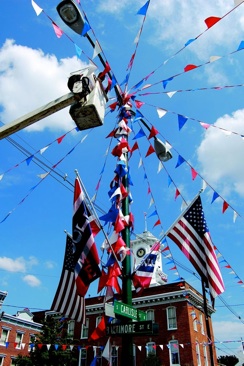 Every three years in a unique and unparalleled tradition, the good people of Greencastle and Antrim Township in Pennsylvania go all out to continue an event that started over 100 years ago — Old Home Week. This year marks the 38th triennial year for the celebration.

Very few towns can claim this kind of fame — or commitment. Current residents work at or join in the fun and former residents come from near and far — across the United States and from Europe to South America. The travel to enjoy a full week packed with everything from the triennial photo on the square, (the last one of which measured six feet in length) to multiple school reunions, a parade and more. Events are planned around just about any reason that lends itself to the week’s main reason for being — a gathering of friends, neighbors, schoolmates and families.

And everyone involved, whether volunteer or visitor, is justly proud of the longevity of this event. Some of that staying power can be attributed to the fact that this is only held every three years. Bob Johnston has been involved with Old Home Week since

1995. He and his wife Jeannie now co-chair the headquarters committee. â€œDoing this every three years keeps it from getting old,â€ he says.

The beauty of this event is also the involvement of many local institutions which open their doors, offering visitors a chance to see the inside of everything from the Allison-Antrim Museum, to the local newspaper the Echo-Pilot (this year offering a free photo booth), the Corning Credit Union, and the offices of several service organizations.

Old Home Week was the brainchild of Phillip Edward Barr and came to life in August of 1902. Barr originally called it the “Old Boys’ Reunion,” and not only came up with the idea, but also planned the reunion activities. That first event included a chicken dinner, speeches and band concerts, and proved to be so successful that it was repeated three years later.

Barr, an opera singer, was the son of Adam and Catherine (Goetz) Barr. A graduate of Greencastle High School, he started out traveling with the then widely popular minstrel shows. Recognizing his talent, Monsignor Satolli of St. Aloysius Church found the funding to send him to Italy to study voice, piano, violin and Italian for four years. On his return, his career took off and he traveled the nation on concert tours.

In 1891, never forgetting his roots, Barr bought property in the borough of Greencastle and when not traveling, he and his wife, Jannette Dubbell from Michigan, would return to Greencastle. From the seed he planted was born the present Old Home Week.

The original Old Boy’s Reunion has now taken another major step, with Carol Christophel appointed the first woman to chair the town’s premier gathering. “I have been working with this triennial event since 1985 and it is mainly a matter of going up through the ranks,” she modestly maintains.

To raise money for the celebration, “we sell T-shirts, hats, visors and badges,” says Christophel. The only other source of income is donations.

Every three years a new badge is issued, badges over the years have become collectorsâ€™ items. This year commemorates the granite monument erected on the site of the death of Corporal William H. Rihl, the first Union soldier killed north of the Mason-Dixon line during Civil War. His statue, located just north of Greencastle on Rt. 11, is pictured on the badge and the front of the very detailed program, both of which come in a plastic bag when people pay their admission fee. (The program booklet notes when a badge is required for admission to an event.)

Most of the events do not deviate very much from year to year. “We do things on the same day, the same place and the same time,” says Christophel.

This year, like those in the past, will start with a Kick-Off breakfast and proceed through a dizzying array of activities, from a 5K Run-Walk and 1K Kid’s Race to the singing of the traditional cantata, “The Torch is Passed,” repeated this year from the 37th celebration. Concerts will be held at the Jerome R. King Playground Band Shell, as well as art shows, afternoon tea at Highline Restaurant. The pageant will include a play,Â  “Seems Like Old Times,” featuring historic scenes from Greencastle from 1910 â€“ 1962. There will also be an Old Timer baseball game and a three-on-three basketball tournament. Windows in the downtown stores will be decorated and judged in six categories. The Gallery of History will include Mark Twain Noe paintings of Greencastle. And then thereâ€™s the Fred C. Kaley Indoor Circus reunion, picnics, a “fun” dog show, a flower show and the ever popular root beer float giveaway. The closing events include music on the square and a sparkling fireworks display.

â€œWe have 45 committees who do all the work,â€ says Ken Shockey, Old Home Week webmaster. “And they can all report in half an hour. This event runs like clockwork.â€

There is no commercial involvement, notes Johnston. The only concessions for food and drink are operated by local scouts.

One of the new events this year will be a Walking Tour of Greencastle, replacing a bus tour.Â  The â€œofficialâ€ bicycle ride, covering Antrim Township, will be held on the last Saturday, also a departure from previous years.

Where does this spirit come from that has kept Old Home Week going for so long? “We are unique,” says Christophel.

Old Home in Greencastle will be held from August 3 through 11. To register and get a program and badge, visitors can go to the Headquarters at the Susquehanna Bank on the Square. The fee is $6 per person. For additional information, call 717-494-6751 or visitÂ www.oldhomeweek.orgÂ online.