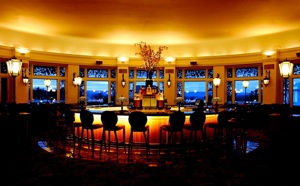 Not since he built it in 1933 has Milton Hersheyâ€™s elegant fine-dining space received such attention. A redesign of The Circular, the main dining room at the Hotel Hershey that was completed in April, offers American-made furnishings, a new vision of American cookery, Prohibition era-inspired cocktails and an open pastry kitchen.

Hershey, the chocolate tycoon, was more than a candy maker. A man of utopian vision, he intended his chocolate town to be a workerâ€™s paradise. To that end, he installed the green space that is today Hersheypark, established a school for indigent boys that today offers scholarship education to both boys and girls, and designed the Hotel Hershey, a grand establishment that features much of the decorative stained glass that Hershey acquired throughout his life.

Its Circular Dining Room was a showcase for transom and panel windows figured in flowers, fruit and birds. Hershey designed the room in honor of solo diners, whom he felt were often diminished by being stuck in a corner. In the center, a dance floor focused attention. Beyond the roomâ€™s wall of windows were manicured formal gardens with deep reservoirs that appeared merely decorative but were in fact the hotelâ€™s water source.

Hersheyâ€™s innovations enhanced a room that epitomized dining in a grand hotel. Jackets were required for men, and ladiesâ€™ attire did not include trousers. Things are different in The Circular now.

John Daly, director of food and beverage for hotel, describes the current style as â€œcasual elegance.â€ Wood tones have been lightened and obstructions in the room removed to make an open space that seats 245 diners at tables of cherry wood, bordered in mahogany. The tables were made in Wisconsin, the chairs, in New Jersey. Low dividers that break the room into more intimate spaces feature hidden induction heaters that allow their use for buffet service. A filter system provides crystalline tap water, served in reusable, ceramic-capped bottles.

A private dining space, separated from the main room by glassed wine racks, offers seating for 10. Another space, called the Alcove, can seat 12.

Executive Chef Ken Gladysz said it took two years of research and consideration before changes were made to the room. â€œThe restaurant has a tremendous amount of history, as the old formal dining room of a luxury hotel,â€ he says. â€œIf weâ€™re going to change the ambience, do we change the style of food?â€

In keeping with current trends, the kitchen makes use of local, fresh fare and updates dishes to reflect whatâ€™s in season. The menu is less extensive than it was, concentrating on grilled items and dinersâ€™ selections. And todayâ€™s menu has what would have been unthinkable in the past — a hamburger. Made from dry-aged sirloin, â€œthe flavor is phenomenal,â€ says Gladysz. â€œItâ€™s a bombinâ€™ hamburger.â€

Accompaniments range from folksy cheddar grits to elegantly truffled mac and cheese and Cipollini onions braised in bordelaise sauce. Creamed spinach is made with maple and bourbon, and the house-cut French fries receive sea salt, herbs and parmesan before being served with a house-made ketchup.

Among starters, pretzel-crusted rock shrimp is a perennial favorite. Hersheyâ€™s most elemental ingredient is represented in cocoa-dusted Maine scallops. Starters dominate the menu and invite construction of a meal of small plates. A classic Caesar salad is offered, as are a steak salad, lobster cobb salad and iceberg wedge. All the charcuterie is house-made and -smoked.

Not only wine pairings, but also cocktail pairings and craft beer pairings can be suggested. Among beers on tap is a chocolate-peanut butter porter brewed in Maryland, and bottled beers include a British-made chocolate stoudt. Mixed drinks â€œbeckon to the Prohibition era, which is when the hotel was built,â€ Gladysz says.

A semi-circular bar backs the open pastry kitchen to anchor the center of the room. Mixologist Alisha Bird heads a crew educated in the craft of making potables. Details are considered, including the selection of round ice cubes over square (no corners to melt and dilute the drink). A special grinder is employed to convert chunks of ice to nearly softball-sized ice globes, over which drinks are poured.

A signature drink is the Blind Tiger, a mix that includes tinctures of pink peppercorn and hibiscus. Its name references a term for speakeasy during Prohibition. Bird explains: a blind pig served only beer and wine, but a blind tiger offered spirits. The hotelâ€™s Blind Tiger is â€œsweet, itâ€™s tart. Itâ€™s salty,â€ says Bird. â€œFor me, it has everything I could ever want.â€

The Innovator, a drink named for Milton Hershey, involves rose and cucumber-infused gin, with rose syrup, maraschino and ginger liqueur. It arrives in a low tumbler with a single, oversized globe of ice cooling the lavender-tinted mix. Traditional drinks include a mint julep, sazerac, Singapore sling, side car and a daiquiri named for celebrated jazz-era drinker, Ernest Hemingway.

Chocolate is exceptionally well represented in dessert potables that include four different styles of chocolate martini, a maple-chocolate Manhattan and a chili-mocha cocktail made with tequila. Desert wines include a locally made Coco Nostra.

And chocolate is everywhere on the dessert menu. Elaborate sculptures made of chocolate, that decorate the open pastry kitchen, attest to respect for the ingredient on which the town was founded. Chocolate soufflÃ©, peanut-chocolate-banana parfait, and chocolate fondue are among selections that also include a bourbon-chocolate mousse and a brown-sugar cake dressed with chocolate streusel. And every diner leaves with a salted caramel, that arrives as their meal concludes.

A single table in the dining room is unlike all the others. At the apex of the roomâ€™s curve, â€œMr. Hersheyâ€™s Tableâ€ features unique appointments. The chairs are different and the table is extra-large. Beside it on the wall is a bronze plaque featuring a bas relief bust of Hershey, smiling down.