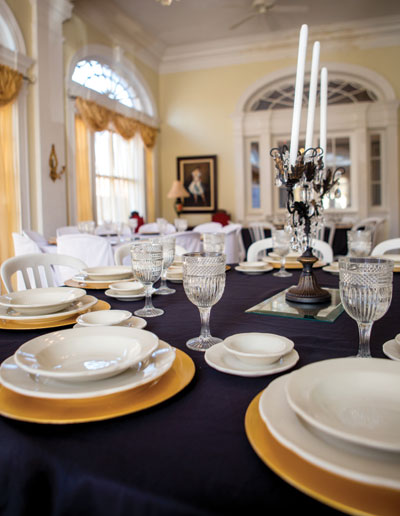 The historic Shenandoah Hotel, located at the intersection of N. Queen and W. Martin streets, has been refurbished and is now open for weddings, parties and other events. While it no longer functions as a hotel, the facility’s ballroom is back in business after being used sparingly in recent years.

New manager Larry Foust has been overseeing the relaunch since he arrived in early September, and has already booked several weddings for 2017. The first event on the calendar was a wedding for 180 people, which was scheduled to take place Nov. 26. The first week of December, the Shenandoah Hotel was to host Main Street Martinsburg’s annual “Doors to Christmas” wreath program. And on Jan. 15, ERA Realty will hold its annual Christmas party in the ballroom.

Beyond that, five more weddings have been booked throughout 2017: One in April, two in June, one in July and one in October.

In his short time on the job, Foust has replaced the lights in the parking lot and gotten the ballroom ready for the holiday season.

Before arriving at the Shenandoah, Foust worked for 20 years in real estate in the Washington, D.C., area.

Prior to that, he served as office manager and conference coordinator for American Enterprise Institute, a Washington-based thinktank. In that capacity, he organized events for then-president Gerald Ford, among others.

Foust is no stranger to the Eastern Panhandle, having lived in Charles Town for many years. He and his family came here to find a more relaxing environment for his mother. The only downside of the move was that it meant a daily commute to D.C. that began at 3:30 a.m.

“I don’t miss that at all,” he said. In his new role, the biggest challenge so far, Foust said, has been getting the ballroom back to working condition. He’s also been busy getting other Gateway properties ready to rent. The Shenandoah Hotel is located at 200 N. Queen St., and a barbershop Is located at 204 N. Queen. Storefronts at 206 and 208 N. Queen are currently vacant, he said, as is the 1902 building across the street.

People who have visited the Shenandoah Hotel since Foust’s arrival have liked what they’ve seen, according to Foust. “They’ve been pretty positive,” he said. “People are pretty happy to have it back.”

The Shenandoah Hotel, which is listed on the National Register of Historic Places, sits on the site of the old Blondel Mansion, which was purchased for $45,000 in 1923 and subsequently torn down. A group of community investors then came together to build the Shenandoah Hotel, which opened to the public on George Washington’s birthday, Feb. 22, 1926. It quickly developed into one of the cornerstones of the Martinsburg social scene, and became a popular destination for tourists and celebrities alike.

Actors Debbie Reynolds and Robert Mitchum were among the celebrities who stayed at the hotel through the years, and Robert F. Kennedy once visited.

But the glory days of the Shenandoah Hotel proved to be temporary. It became the Gateway Inn during the 1960s, and about 20 years later, the hotel closed its doors and eventually sank into a state of disrepair.

That’s how Ben Fogle of Gateway Holdings in Potomac, Md., found the building when he purchased it in 2000.

According to Foust, who also helps manage several other Gateway properties, Fogle invested approximately $400,000 in repairs and renovations to the aging building.

Like many other businesses, though, the Shenandoah Hotel was impacted by the economic downturn that began in the wake of Sept. 11, 2001, and escalated in the middle of the past decade. Aside from occasionally serving as a movie set – in 2003, the facility was used in the making of the film “Gods and Generals,” and in 2015 some scenes from the AMC television movie “Making of the Mob” were shot in the hotel – the facility was largely inactive in recent years until Foust came on board Sept. 3 of this year.

So far, Foust said, word of mouth has been responsible for bringing in the events that are currently booked. He expects that to continue. “I think once we have the first two or three events, that’ll help,” he said.

Foust is one of just three people currently working at the Shenandoah Hotel, along with Kimberly Markley and John Kafka. The trio’s primary responsibilities include setting up for an event and cleaning up afterwards.

They are generally not involved during the actual event, since the wedding party brings its own caterers who handle all the details. The caterer must also have a liquor license enabling them to serve alcohol during an event, Foust said.

Foust believes the refurbished ballroom compares favorably with similar facilities in the region. “I think it’s the nicest space in 50 to 75 miles for ambience and stepping back in time,” he said.

Those who have already booked events seem to agree.

“They fall in love with the space,” Foust said.

While the upper floors are no longer suitable for a hotel to operate on the site, Foust says he hopes to bring in enough investors to someday open condominiums or apartments. And he believes an entrepreneur could operate a successful small restaurant in the building, along with a catering business.

Foust believes he’s just getting started. “I’m only 73,” he said, “so I’ve got another 15 years, hopefully.” Foust is on site each weekday from 10 a.m. to 3 p.m. to meet with anyone who may be interested in booking an event at the Shenandoah Hotel. He is also available by appointment. In addition to the ballroom, the lobby and banquet room are also available for rental.