Shepherdstown, WV, home of prestigious Shepherd University and known for its quaint, small-town charm. With its proximity close to virtually every historical hot spot related to the Civil War in the Eastern Panhandle area, this town is a popular destination for history buffs from all over the country. Just a short drive from town will find yourself arriving at your choice of Antietam National Battlefield across the bridge that takes you on a scenic ride over the Potomac River into Maryland or to Harpers Ferry, WV by way of a breathtaking drive which will ultimately lead you to this historic town where John Brown fought to end slavery and was hanged for his efforts. This charmer is situated at the confluence of the Potomac and Shenandoah rivers where the states of Maryland, Virginia and West Virginia meet. With all of this rich history to be enjoyed, naturally, vacationers want to stay in an establishment equally as impressive and fraught with history. The Thomas Shepherd Inn is the perfect place to hang your hat and rest up for those historical adventures while at the same time basking in the history that belongs to the Inn itself. 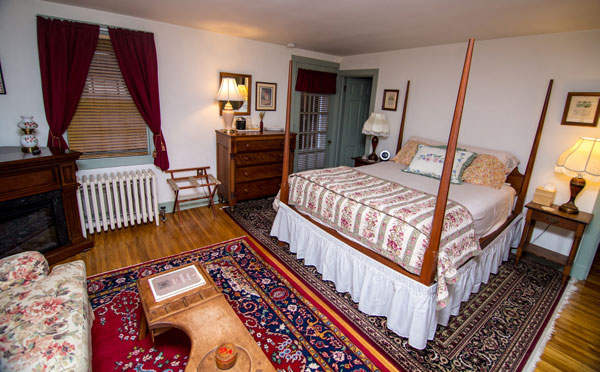 As you reach the four way stop in Shepherdstown, you can’t help but notice the grand beige brick Federal-style building with dark green shutters and trim situated on the corner of German and Duke streets. This is the home of one of the finest bed and breakfast establishments in West Virginia, the Thomas Shepherd Inn. Over its 33 consecutive years of operation, this historic inn has continuously remained open for business even during those periods when its owners and subsequent Inn Keepers have changed, which has been only happened on three occasions.

This is not only a testament to the popularity of the Inn, but also its owners both past and present. I must say that this fine establishment seems to naturally evoke a feeling of peace and tranquility as soon as you walk through the door, only to be followed by a heartfelt greeting from current owners David and The property located at 300 West German Street in historic Shepherdstown, West Virginia was not always a bed and breakfast. Built in 1868, the building served for many years until 1936 as the parsonage for St. Peter’s Lutheran Church of Shepherdstown. During this time it consisted of a parlor, dining room, kitchen and three “chambers” aka bedrooms. It was in 1936 when Dr. Halvard Wanger and his wife, Dr. Sarah Elizabeth McFetridge purchased the property for $6000.00 and set about the task of adding the Duke Street addition of the building to serve as a doctors office, complete with exam rooms for their patients and offi ces for themselves and their small staff. Still today, the plaque bearing their names and credentials that the couple had placed on the Duke Street exterior wall proudly remains. A plaque with Dr. McFetridges’ name and specialty of anesthesiology also remains hanging on the wall of the Inn just outside of the interior door that used to open into the doctors office. Dr. Wanger passed away in 1977 and Dr. McFetridge passed away in 1983 after which time the property was purchased by Ed and Carol Ringoot who converted it into what is now this gracious and accommodating bed and breakfast.

I must admit that I find myself to be both profoundly proud as well as uniquely qualified to speak to the Thomas Shepherd Inns authenticity and attention to detail when it comes to preserving the history of this building and its obvious life long calling to serve as a place of healing, rest, and all around well being for those who have had the pleasure of gracing its doorstep over the many years. As it would happen, Dr. Halvard Wanger and Dr. Sarah Elizabeth McFetridge were my paternal Grandparents and my sisters and I spent a great deal of our time there when we were younger. It was here that we had some of the best times of our lives and made many irreplaceable special memories. In the early years of the Thomas Shepherd Inn I had the pleasure of working with the founders and original owners who took great pains to honor the memory of my grandparents and family while transforming what was once grandma’s house into this stunning, historical Inn. Although many things have changed in the way of updates and improvements from those memories of my youth such as the color of its brick facade which was once red and the addition of private bathrooms off of each bedroom, not to mention central air throughout, in many ways things are very much the same as I remember them.

Many pieces of furniture that belonged to my grandparents still remain and are used by the Inn and its patrons still today, Grandma’s wing back chair that she would sit and knit or crochet in being one of them. As a matter of fact, it resides in the same room as it did yesteryear, but in a different spot. If you look up while you are in the large yet cozy sitting room towards the back wall you will catch a glimpse of my grandfather’s beige hat that sits upon a tall antique chest. I can still vividly recall him wearing it when he took my sisters and I on what we used to refer to as nature walks. I can’t begin to tell you what it means to me and my family to know that the house that we all loved so much has been so well cared for and clearly loved by each one of its subsequent owners not to mention shared with so many people from all over the country, many of whom are return customers to the Thomas Shepherd Inn.

The current Inn Keepers, David and Lauren Duh are from New Jersey and although their perspective professions have given them many years of experience working with the public, neither one has any previous experience as with Inn Keeping. David Duh will retire at the end of this year from his job as a high school Chemistry and Physics teacher while Lauren Duh worked as a nurse and nurse practitioner over her expansive career. Dave did work in the college cafeteria while he attended Allegheny College and Lauren’s first job was serving breakfast at the Great Harbor Inn in Martha’s Vineyard, so I suppose that should count for something in the way of experience. After the couples youngest daughter was set to graduate from college and with retirement for both of them on the horizon, Dave presented Lauren with a ticket to a beginning Inn Keeper class for Christmas one year and this started the adventure. After attending the class, which drove home, the points that Inn Keeping is not only an all-consuming proposition but also not a hugely profitable one with an average life span of seven years, these two lifelong public servants began taking the steps to parley their caring of people to the next level and decided to purchase a bed and breakfast. After looking at a number of establishments and finding none of them to be a good fit for them, they found the Thomas Shepherd Inn and fell in love with it and Shepherdstown as well. As with most people who have grown up in a small town, they were easily reminded of all of the perks and relationships that can only be found in such a setting. What sets Shepherdstown apart from most small towns in America is its central location to so many historical destinations all in its proverbial backyard. Its even a short drive to Washington, DC, our Nations capital and all of its countless attractions.

Dave and Lauren feel that the breakfast is just as important as the inn when it comes to this bed and breakfast. This unique attitude truly sets the menu at the Thomas Shepherd Inn apart from others in our area and around the country for that matter. For those of you with special dietary concerns, they are more than happy to accommodate you. From Vegetarian or Vegan to Diabetic or Celiac Disease or any other limitations that you may have when it comes to mealtime, they’ve got you covered.

As you can see, the Thomas Shepherd Inn is much more than an historical landmark or a lovely, comfortable place to rest and relax while vacationing in Shepherdstown, WV, it has always been someone’s home since the building was erected in 1838. This remains to be true even today in its capacity as a bed and breakfast. I have been told that one of the best parts of the patron’s experience at the Inn is the friendships and unexpected support systems that have frequently developed there. I found it rather amusing to find out that on occasion people who have met there come to find out that they not only live in the same state but only a few miles away from each other. So if you are a Civil War buff or just are simply in the market for some relaxation and pampering I highly recommend a get away at the Thomas Shepherd Inn. Tell them that Dr. Mac’s granddaughter sent you!