Ask the thousands of children who flock to the Shenandoah Valley Discovery Museum each year what they like most about it, and you’re likely to get a variety of answers. But most of their responses will probably have one common theme: It’s just a crazy amount of fun packed into one place.

From Star Wars- and Harry Potterthemed programs and exhibits to general zaniness, there’s a little something for everyone at the museum. But parents and teachers alike can rest assured: It’s not just fun, it’s educational, too. 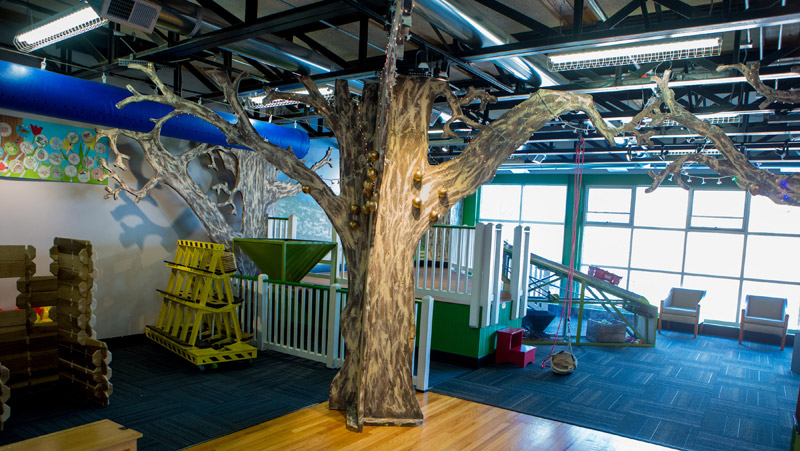 According to Ryan Hall, the museum’s coordinator of marketing and membership, the common thread connecting all programs is that they feature a hands-on, educational base. This includes adult-oriented events such as jazz night and Star Wars night as well as a wide array of children’s activities. “Education is changing all the time,” said Hall, “so we have to be adaptive to changing themes.”

Sometimes, he added, children put the exhibits to use in unexpected ways. For example, some have made paper airplanes and flown them into the museum’s Bernoulli blower, a device which uses fast-moving air to keep objects suspended in flight.

The museum opened in 1993 on Loudoun Street in Old Town Winchester and moved around the corner to Cork Street in May 2014. Today there are 17 employees, including six who work there full-time. “We outgrew (the old location) and we wanted to provide more to the community,” said Ryan Hall, the museum’s coordinator of marketing and membership.

With the move to Cork Street, the museum tripled in size. It now has 20,000 square feet of space on four floors and, according to Hall, much more natural light than it had at the old location. The move has certainly paid off; 71,000 people visited the museum in 2016, according to Hall. “It’s been a significant change for us,” he said.

The fourth floor of the Shenandoah Valley Discovery Museum is its rooftop and contains outdoor exhibits like a Virginia native plant garden, which hosts programs with the Blandy Experimental Farm and several area garden clubs.

The museum also offers bowling and giant chess on the fourth floor, and a special indoor area on the rooftop features a musical floor on which movement creates sounds ranging from classical music to crazy sounds.

Perhaps the museum’s most popular exhibit, the apple picking shed, is a nod to the Shenandoah Valley’s rich apple producing heritage. While many kids may see it as just another way to have fun, the shed is really a lesson in simple machines, complete with levers, pulleys, cranks and gears.

Overnight group outings have become popular, with Boy Scout and Girl Scout troops often spending the night at the museum on the floor of their choice. Essentially, Hall said, the groups move in for the night.

The Shenandoah Valley Discovery Museum is a popular destination for children of all ages looking for unique summer camp programs. This year, the museum will offer 34 camps, more than ever before. Choices range from chess camp to a Hogwarts adventure camp for Harry Potter enthusiasts.

But, owing largely to the enduring popularity of the Star Wars movies, a returning favorite, Jedi camp, is still the most popular offering, according to Hall. Not all camps will be held at the museum. A single-day aviation camp will be held at the Winchester Regional Airport.

No matter how offbeat the camp concepts may seem, they all have their basis in educational themes. While popular culture draws attention to the camps, Hall said, the museum’s educators use themes that relate to Virginia’s Standards of Learning, or SOLs. Lead educator Diane Schnorr possesses a doctorate degree in education.

The goal, said Hall, is “to keep kids excited about learning during the summer months.”

The Shenandoah Valley Discovery Museum offers a menu of weekly programs that are free with admission. These programs rotate every three to six months, and activities change from week to week.

Some of the most popular programs include Maker Fridays, in which kids use concepts learned in school. One week in early March, they built bridges and boats.

The museum also offers a health day each week. Various health, nutrition and fitness professionals and, occasionally, Shenandoah University nursing students come in to teach kids valuable lessons on topics such as the importance of brushing their teeth, or washing their hands in fun, creative ways.

Another program, a teddy bear clinic, helps kids get comfortable with doctors and dentists.

As a registered 501c3 nonprofit organization, the museum’s mission is to bring experiential education to the community. In order to do so, it holds numerous fundraisers each year while also working to obtain various grants, donations and support from foundations.

Community outreach efforts also include visits to schools and organizations like the Boys and Girls Club. The museum gives free memberships to about 150 Head Start families each year so they can also take part in its programs.

“It’s a huge benefit to kids in the area,” Hall said. “We are very lucky to live in this area. It’s very philanthropic. The support from businesses and individuals has been incredible.”

The biggest fundraiser of the year at the Shenandoah Valley Discovery Museum is the annual carnival, which this year is scheduled for Aug. 26. Between 200 and 300 people usually participate in the event, which features carnival games and a costume party.

Beginning April 8, the museum’s anniversary celebration will serve as the launching pad for a new exhibit, Pollinator Plaza. Featuring a live beehive, this exhibit is expected to stick around for at least two years.

Typically the museum will only introduce one new exhibit in a calendar year, but a second exhibit, the Waterways Exhibit, will debut before the end of this year, Hall said.

Kids aren’t the only ones having a blast at the Shenandoah Valley Discovery Museum. Spending time there is fun for the staff as well.

“You can’t leave this job unhappy,” Hall said. “You’re bringing joy to the kids and you’re teaching them something.”

On April 1, the museum was scheduled to unveil its new membership hierarchy. At $75 for six months, two people can get in for free. This membership level, Hall said, is designed for nannies, babysitters and other caretakers who might want to bring a child to the museum.

For $100, four people can get in for free, and at the premier level, for $150, admission is free for up to six people. This level also includes discounts on camps and other programs, as well as in the museum store. Premier level members can also gain admission to Association of Science and Technology Centers and Association of Children’s Museum facilities nationwide.

The Shenandoah Valley Discovery Museum is open to the public from 9 a.m. until 5 p.m. Tuesday through Saturday and from 1 p.m. until 5 p.m. Sundays. It is closed Mondays with the exception of some school holidays.

Admission is $8 for everyone two years old and up. As part of Old Town Winchester’s monthly First Friday activities, admission is free from 5 until 7:30 p.m. on that day. Children under 16 must be accompanied by an adult at all times. Admission is good all day, meaning patrons are free to leave and return.

The museum is closed during the annual Apple Blossom Festival, but radio station WINC-FM offers a prize package in which winners can watch the Grand Feature Parade from the museum’s rooftop.

Food and drink is not available in the museum. There is a gift store with items starting at 75 cents that can be used for science and art kits, musical instruments, toys, puzzles and more.

For more information about the museum and its programs, call 540-722-2020 or visit discoverymuseum.net.