Do you ever get the feeling that you’re stuck in a rut? Do you ever look around your home or, perhaps, your business and feel like you’re ready for a whole new look?

Whether you just want to make a few cosmetic changes here and there, or even if you’re considering something completely different, chances are MakeNest Interiors can help.

This design studio, located in the heart of Old Town Winchester, has been making dreams come true for residential and commercial clients for more than a decade now.

“The most rewarding aspect of what we do is the sense of giving people a sense of excitement to come home again,” said MakeNest owner and designer Paul Miller. 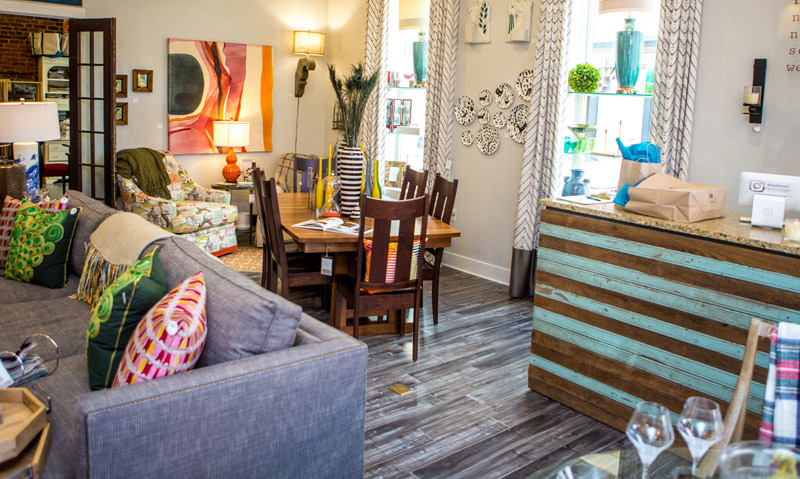 Miller owns the business along with his husband, Edgar McKee, who serves as a silent partner. Miller is a native of Front Royal while McKee is a native of Augusta, W.Va.

Miller launched his design career in 2000, mentoring under Winchester-area designer Deborah Langfitt. He opened MakeNest Interiors in 2004 in Old Town, just a few doors down from his current location at 1 S. Loudoun St. Today the business has three employees in addition to Miller.

Miller said he couldn’t be happier to be a part of the downtown Winchester business community. He chose Old Town for his studio because “I really wanted people to feel like the business is part of the community. I didn’t want a strip mall feel.”

Miller sometimes spends almost as much time outside the store, meeting with customers and working on projects, as he does in the store. The showroom essentially functions as a place where clients and potential clients can see what might be possible.

Miller is a strong advocate of using American-made materials for his projects whenever possible. He is also a big fan of sustainability, and, with that in mind, the wood he uses is sustainably forested. If a project has a vintage theme, its materials are re-used.

Occasionally, Miller said, he will incorporate foreign-made goods into a design, but when he does, it must be indigenous to a certain part of the world and fit into a certain theme; for example, he might include Nicaraguan pottery in a project with a Central American theme. Miller said he works with local contractors on construction, painting and design aspects of a project.

For Miller and his clients, the design process begins with a simple survey that allows him to gauge the client’s likes and dislikes. From there, they get together for a 30-minute appointment in the MakeNest studio. If they’re still on the same page at that point, Miller will go to the client’s home or business for a site visit.

Miller and the client will then discuss layouts, color theory and developing a design concept.

The goal is to get it right the first time. “I pride myself on listening well at the beginning,” said Miller.

Miller handles both residential and commercial projects, and, as might be expected, he said there’s a significant difference between the two. On a commercial project, “you can be a little more theatrical,” he said. “There’s not just one individual to match their style. It’s more working with a brand.”

On his website, makenestinteriors.com, Miller discusses looking at a business from the inside out as well as the outside in. It’s a simple concept, he said, focusing on the client’s point of view: “(It’s) what would a customer think when they come in. Outside in is a needed perspective.”

According to Miller, Old Town’s small business owners are a tightly knit group. The common trait they all share, he said, is that they communicate well together. “It’s nice to be part of such a close-knit community,” said Miller.

One of his Old Town neighbors, Village Square Restaurant, had the distinction of being one of Miller’s first clients when he opened MakeNest Interiors in 2004.

Miller mostly works within a two-hour radius of Winchester, completing projects in cities like Fairfax, Lorton and in Washington, D.C., among others. Occasionally, his work takes him further from home; he has worked with clients in Martha’s Vineyard and in Charlotte, though, he said, those have been exceptions.

Miller strives to maintain a work life balance as much as possible, and tries to limit his typical work week to between 40 and 50 hours per week. He likes to go for walks at the State Arboretum of Virginia after work and to be home in time to cook dinner.

Miller’s vision for the future of MakeNest Interiors includes further growth for the commercial aspect of the business in the coming years. Ideally, he said, he would like to create a catalogue of the work being done by the various artisans with whom he works.

“We want to be a place where people go for heirloom pieces that will last for generations,” he said.

Miller often finds artisans at the various trade shows he attends. He said he prefers to develop a relationship with those who come with less hype; in other words, those whose work speaks for itself. Having an approach to their work that’s similar to his philosophy doesn’t hurt either.

“Point of view is important when it comes to working with artisans,” he said. Currently, Miller said, he regularly works with about half a dozen artisans. There are several more with whom he works on a less frequent basis.

Proximity to Winchester helps, at least from a logistical standpoint; for example, he said, it seldom makes sense to work with an artisan in California who would have to ship their work across the country. Miller has relationships with artisans in Ohio, North Carolina and Pennsylvania as well as Virginia.

“We’re willing to cast more of a regional net,” he said. In addition to the Village Square Restaurant, Miller’s work can be seen at Ed’s Heads Hair Salon in Stephens City. He has also completed, by his own estimate, at least a dozen projects on the campus of Shenandoah University.

He recently worked with SU president Tracy Fitzsimmons to refurbish her office. Miller also helped design the school’s residential suites that host visiting artists, professors and donors from outside the area. And he worked on a project in the new Health & Life Sciences building. Each project at Shenandoah, he said, has a different feel from one building to the next.

“We really feel fortunate to have the relationship we have with Shenandoah University,” Miller said. Building upon that relationship even further, Miller was scheduled to be among the featured speakers at the university’s annual business symposium in late March.

MakeNest Interiors is committed to giving back to the community it serves, and with that in mind, the business has participated for the past two or three years in raising funds for Literacy Volunteers and Habitat for Humanity during the holiday season. Customers are asked to make a donation and MakeNest will match it.

So far, Miller said, approximately $1,000 has been raised, and Miller is optimistic that MakeNest will raise even more this year and beyond.

For customers who visit the MakeNest studio, there is sometimes a sense of urgency which they may not get in another store. Miller explains it this way: “You might see sectional or dining tables, but the vintage artisan pieces, the mid-century, retro items – you see them once and you don’t see them again. The vintage things – you find them, you may never see them again. So spontaneity comes into play.”

MakeNest Interiors is open from 10 a.m. to 5 p.m. Monday through Thursday, 10 a.m. to 6 p.m. Friday and Saturday, and from noon to 4 p.m. Sunday. The studio typically expands its hours during the summer months. For more information, call 540-336-3385 or email paulmiller@makenestinteriors.com.