Schmankerl Stube has been Hagerstown’s home for authentic Bavarian food for almost 30 years. Located at 58 S. Potomac Street in Hagerstown, Maryland, the restaurant was built to honor Hagerstown’s German Roots and to celebrate Bavarian Cuisine.

Having emigrated to the United states from Bavaria, founder Charles Sekula wanted to share his love of his homeland, and give people a taste of Germany. From the layout of the restaurant, to the food, and the way the servers are dressed, everything is about Bavaria. The restaurant itself is designed to transport patrons to Germany, where the waitstaff wears traditional Bavarian clothing including Dresses (Dimdls) and Lederhosen. 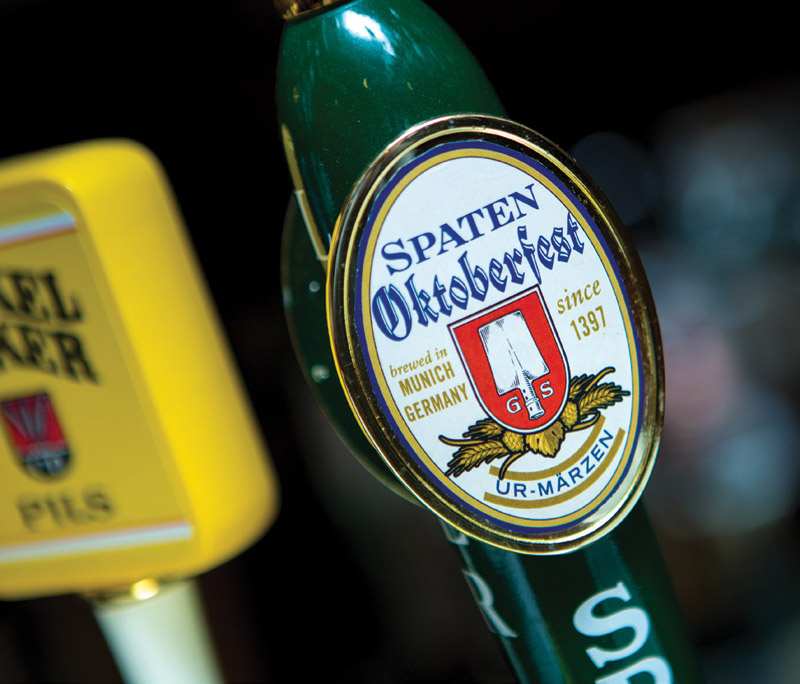 The food it serves is Authentically German. To achieve this, they have stuck to traditional German recipes, even going as far as to hire a Bavarian Chef, Deiter Blosel. Having the same vision, it was only natural that when Charles Sekula decided to sell the restaurant, he would do so to his chef of almost 20 years. Both men knew they had something special and they wanted to keep that moving forward into the next 30 years.

Very little has changed since they’ve started transitioning because the changes to the menu were actually made when Chef Dieter Blosel arrived from Germany in the late 90’s and the transition between owners has been a natural progression. “Very little has changed,” Deiter assures me with a smile. “Charles still greets the customers… I just work more.”

It was what he and Charles had planned: Keeping the restaurant as it should be, authentic Bavarian recipes cooked by a traditional Bavarian Chef.

“One of the unique features of running a Bavarian restaurant is the fact that it is a destination restaurant – it’s not something you just say ‘Hey, I feel like some German food tonight.'” Deiter explains about how the restaurant has managed to keep its customer base and thrive, even during the economic down turn.

Not only did they keep their customer base— many members of their wait staff have been with them for 10-20 years, one even retiring from the restaurant recently. People who come to Schmankerl Stube plan their visit. Some customers come weekly, others every other week… some only a few times a year, but they come with certain flavors in mind. “Many of our customers have been to Germany and they know authentic Bavarian cooking when they have it.” And they come to Schmankerl Stube for that flavor.

The name of the restaurant isn’t just a description – it is a promise: Schmankerl means ‘Bavarian Culinary Delicacy’ and Stube is German for a ‘cozy room’. Everything about the restaurant is designed around those two words.

The restaurant offers outdoor seating, weather permitting, and when weather does not permit, it offers a warm inviting environment to while away the hours… and enjoy the best Bavaria has to offer. They also offer two private rooms with seating for 35 each. These rooms can be used for special events such as weddings or reunions.

But what is ‘German Cuisine?’ “The basic foods are the same – what you grow locally.” Deiter explains “Regional variations come based on the spices and herbs available.”

“We have steak, chicken and pork, like most areas.”

The difference is how flavors are combined – when you get what Chef Dieter Blosel calls the ‘flavor profile’ of the region.

In regional cooking, it’s all about what grows in the area. This means that the dish from one area, will vary in flavor from an area 10-20 miles away. “I have had people tell me ‘this is not German potato salad'” Deiter quips with a smile. “I know 27 ways to make German potato salad… and all of them are authentic, German potato salad.” It’s all just variations in the flavor profile and what is available locally. A good example of this, would be their Smoked Norwegian Salmon.

The salmon has a deep rich smoked flavor and is excellent by itself, but it takes on a whole new flavor when combined with dill sauce, onions and capers. This combination broadens the flavor, and gives you a taste for the area.

Another favorite, is the breaded and fried tomatoes served with Schmankerl Dressing. The Fried tomatoes are the perfect combination of flavor and texture and the dressing adds a splash of the exotic.

My husband often informs me that my love of pickled herring is… unique. It is something I grew up eating… especially for Christmas Eve Dinner.

This combination takes something I consider a comfort food and turns it into something amazing.

Again, it is the combination of flavors that makes the dish, and make it Bavarian. The Herzhafter Saurbraten is a tender and flavorful pot roast served with a sweetsour sauce that is Saurbraten. It is served with Apple-Flavored Red Cabbage, which is absolutely delicious, and a grilled Bavarian Bread Dumpling – that is soft spongy and delicious.

Their Knusperige Schweinshaxe, a Bavarian style pork shank served with Rahmsauce – a delicious combination of cream sauce with mushrooms and broth that compliments the pork. The sauerkraut is neither too sour nor too sweet, but a good blend of both flavors. It is also served with the apple-flavored red cabbage.

Everything on the menu is authentic, and cooked to perfection and even the desserts are made in-house.

Speaking of deserts, you will want to save some room for the Schwarzwälder Kirsh Torte, which is Black Forest Cake made with Kirschwasser brandied cherries. The cake is the perfect combination of sweet cherries, not too sweet cake and homemade whipped cream.

The perfect ending to a perfect meal. “The best advice I was ever given,” Deiter explains, “is to cook what you love. If you don’t love it, no matter how right you make it— it will still taste bad to you.” It is true about cooking and about life, and it is equally clear, that Deiter Blosel loves what he does, and loves what he’s cooking.

Bavaria is as close as 58 South Potomac Street, Hagerstown. Visit their web site at: schmankerlstube.com or on Facebook at The-Schmankerl-Stube-Bavarian-Restaurant to see their specials or to learn more.