Although there are no tables, chairs or seating, that has not stopped customers from flocking to Bob’s Carry Out, and the kitchen has never been busier cranking out pizza, burgers, wings and more. And the news couldn’t put a bigger smile on owner Bob Widmeyer’s face as the store celebrates its fiftieth anniversary.

Reflecting on his 50 years in the food industry, Widmeyer, 88, acknowledges that he did not have the most traditional entry into the industry.

From 1953-1963, Widmeyer worked shift work at DuPont, with each week a different shift. When he and his wife Dorothy began to have a family, the constant changing schedules in his shifts began to cause friction between the couple. 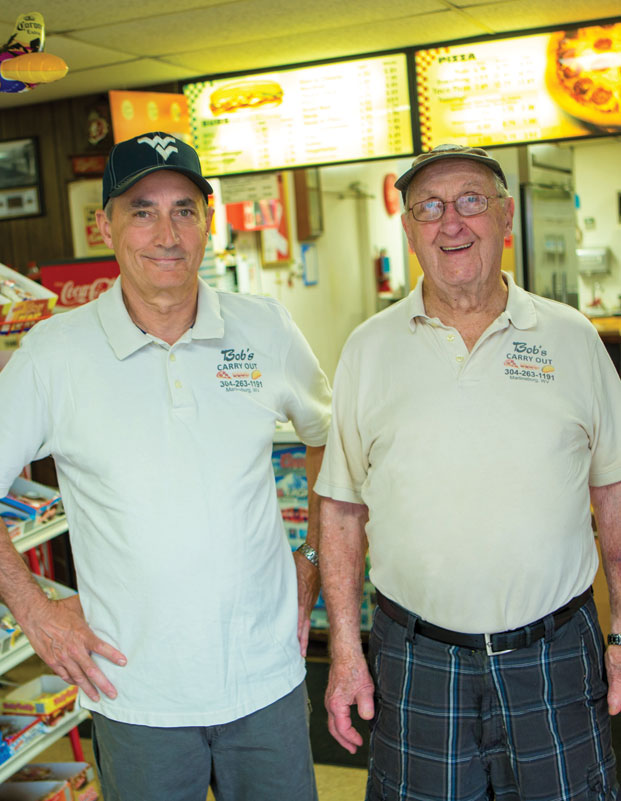 “We just couldn’t get along, and I knew it wasn’t us, it’s the shift work. Every week I’m on a different shift and I just can’t adjust myself. I knew I had to go. I didn’t know what I was going to do, but I knew I had to do something. So, I got some money and opened our first restaurant,” he said.

“I love food. There’s nothing I can’t do with it.”

Widmeyer opened his first restaurant, The Colonial Restaurant, in 1966. The restaurant opened with a very different design than what Bob’s Carry Out is today. The Colonial Restaurant began as a full-service restaurant that could seat more around 175 people. It was located in the old Berkeley Hotel, which was owned by the Citizen’s National Bank. It was not long after opening though, when the bank chose to tear down the Berkeley Hotel to build a new bank in that location, and Widmeyer had to move.

Rather than give up his desire to provide food to his native Martinsburg city, Widmeyer began the search for a new location.

It was in driving around with his wife that he spotted a great spot, an empty building at the corner of Martin Street and Raleigh Street, the current location of the Martinsburg Fire Station. Widmeyer rented the building and enjoyed 10 years at that location before the City of Martinsburg, who owned the property, decided to build a fi re station at that location.

Liking the downtown location, Widmeyer purchased the land on the adjourning corner of Martin Street and Raleigh Street, its current location at 130 N. Raleigh St.

“We purchased the property, and I built the building in 1976. We had our grand opening in August, and it was well accepted by the community. When we opened the store defi nitely didn’t look like it does now. It was very low scale. All I had then was pizza and subs and snacks,” he said.

As the years passed and the community continued to support Bob’s Carry Out, the store grew to expand its menu and what the store carried. Pizza and subs was eventually joined by items like wings, burgers, tacos, ribs and specialty dishes like taco pizza.

Another change to the restaurant would be the addition of Widmeyers’ son Robbie, joining his father to make Bob’s Carry Out a family-owned business.

Determined to stand out and provide the best ingredients and food to his customers, Widmeyer committed to using many of his own recipes and preparing as much in-house as possible.

“Everything we do is in house. I use fresh dough for the pizza, and we cut all of our veggies daily. A lot of people operate out of the bag, but we don’t. We have our own recipes for Mexican meat and our chili, we make our coleslaw and we process our own ribs. We just do everything in house that we can,” he said.

Since adding taco pizza to the menu, it has become the store’s most popular item.

Since the extension was completed, Bob’s Carry Out’s business has increased by 25 to 30 percent. In addition, it introduced new customers who didn’t know the store was there.

“We still get people coming in saying ‘In all the years I’ve lived here, I never knew this was here.’ So, we’re still getting the word out. But we really are grateful with how the community’s supported us,” Widmeyer said.

Despite enjoying tremendous community support and patronage, Widmeyer said he has no plans to expand, due to both personal philosophy and space restrictions as all the land surrounding the store is privately owned.

“I’m hemmed in, so I can’t expand. I wouldn’t want to be any bigger, though. I’m satisfied. You really can be too big. I think there’s a limit to everything,” he said. “I’m happy with where we are and the people here. I’m very grateful to the community of Martinsburg and how they’ve embraced me and my family,” he said.