The Brains Behind Saving Yours

Home » Articles » The Brains Behind Saving Yours

Alzheimer’s disease is defined as a progressive disease that destroys memory and other important mental functions. It’s the most common form of dementia, a group of brain disorders that result in the loss of intellectual and social skills. This catastrophic illness is the sixth leading cause of death in the United States. It’s the fastest growing disease in the country. More than five million Americans are in its grip. In West Virginia alone, there are more than 37,000 people with Alzheimer’s and more than 107,000 people caring for them. 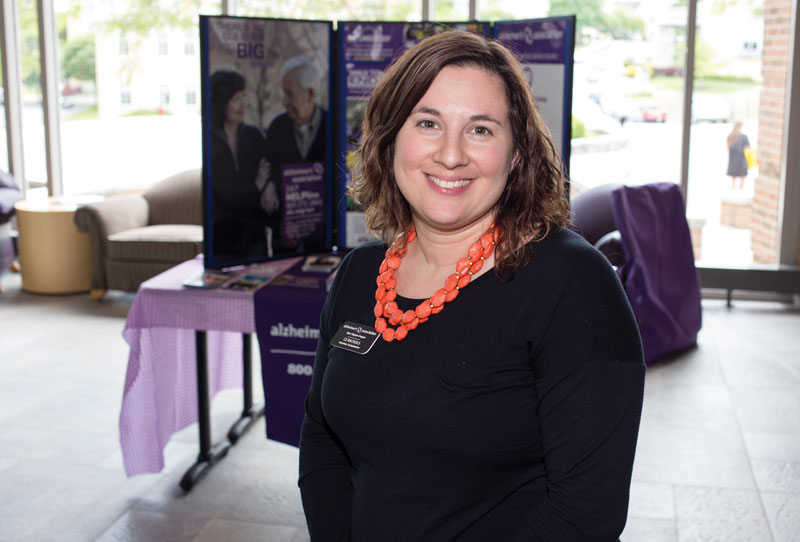 The Alzheimer’s Association West Virginia Chapter is the only voluntary health organization in the state solely dedicated to providing education and support services to individuals with Alzheimer’s and other dementias, as well as to their families and care givers. The chapter serves all 55 counties in West Virginia, six counties in eastern Ohio and one county in Virginia. The West Virginia Chapter has four offices: the headquarters in Charleston and three regional offices, one in Parkersburg, Morgantown and the newest office in Martinsburg, which started in April 2014. Cecelia Nichols is the regional coordinator for the Martinsburg office. The office covers the seven counties of Jefferson, Berkeley, Morgan, Hardy, Grant, Hampshire, and Mineral.

Nichols says the mission of the Alzheimer’s Association is to eliminate Alzheimer’s disease through the advancement of research; to provide and enhance care and support for all affected; and to reduce the risk of dementia through the promotion of brain health.

“The Alzheimer’s Association is the third largest nonprofit fundraiser for Alzheimer research in the world,” Nichols says. “The people who are part of this organization all have the same passion to eliminate this disease. We all have either had a family member who suffered from Alzheimer’s or know someone who has had to deal with this disease. They have a personal connection to the disease.”

Nichols’ grandmother passed away from Alzheimer’s in 2012 at the age of 78. She lived in her own home in Mineral County West Virginia until one fateful night.

“We had special clocks in her home so she could tell when it was day or night and other devices so she could tell the day of the week,” Nichols says. “She would take a bus to an adult day care center. One day she got up at 4:30 a.m. and went outside to wait for the bus. When no bus arrived, she walked ten miles down the road. She wasn’t dressed for the weather. She ended up at a local restaurant. The restaurant owners called our family.”

Nichols says her grandmother was subsequently placed in a nursing home.

“With Alzheimer’s, you lose someone twice,” Nichols says. “First their memories go, then the disease itself takes them.”

Nichols says her family didn’t have anywhere to turn for advice or help in handling her grandmother’s illness and the financial challenges it brought with it. She became involved with the annual Alzheimer’s Association’s Walk to End Alzheimer’s fundraiser. This year the two-mile walk takes place September 23 in Martinsburg’s War Memorial Park. Last year’s event had 500 people participating and raised $57,000.

The Alzheimer’s Association decided to have a regional office in Martinsburg because of increasing needs for services. Nichols became the office coordinator.

“The population in this area, especially in Jefferson County, continues to grow,” Nichols says. “Plus many people live in very rural communities and don’t have many options to get assistance for family members who have Alzheimer’s.”

The office doesn’t have a physical building space. There is a 24/7 education and support line at 800-272-3900, and an office number of 304-671-3077 where Nichols can be reached. The help line can provide answers about the different challenges of Alzheimer’s like possible medications, treatments, care options, caregiving and respite. The helpline’s professional staff offers care consultations that help families assess their needs, assist with planning and problem solving and provide supportive listening. Support groups are available, as well as free educational community workshops.

Nichols says one workshop offered is called, “Know the 10 Signs. Early Detection Matters.” The 10 signs of Alzheimer’s include memory loss that disrupts daily life; challenges in planning or solving problems; difficulty completing familiar tasks; confusion with time or place; trouble understanding visual images and spatial relationships; new problems with words in speaking or writing; misplacing things and losing the ability to retrace steps; decreased or poor judgment; withdrawal from work or social activities; and changes in mood and personality.

If a person experiences any of the 10 signs, that individual should find a doctor they are comfortable with for a diagnosis. The doctor may refer the individual to a neurologist who specializes in diseases of the brain and nervous system or a psychiatrist or psychologist.

Giving assistance to caregivers is also important, Nichols says. According to Agingcare.com 30 percent of caregivers die before the people they are helping.

“Caregivers put their own wellness aside,” Nichols says. “They don’t go to the doctor for their own health.”

“And this disease could bankrupt our health care system,” Nichols says. “Right now one in three seniors dies with Alzheimer’s or another dementia. But again, it’s not just an old person’s disease. Twenty percent of Alzheimer’s cases are early onset before the age of 65. My colleague in Charleston said she heard of a case where a 26-year-old man was diagnosed with the disease.

“The Alzheimer’s Association’s West Virginia Chapter also has brochures and other reference materials to help families deal with the illness.

“If we can make a difference and help just one family down the road, and fund the research so we get rid of this disease so our children and their children don’t have to face it, that’s what counts,” Nichols says.