There’s a new, unique way of getting to know and adopt feline friends. It’s called a “cat café.” The only local cat café in the area is Give Purrs a Chance in Berkeley Springs. Prospective adoptive cat parents can come, look, and play with the cute critters. Feline and human can try each on for size before making the ultimate commitment. 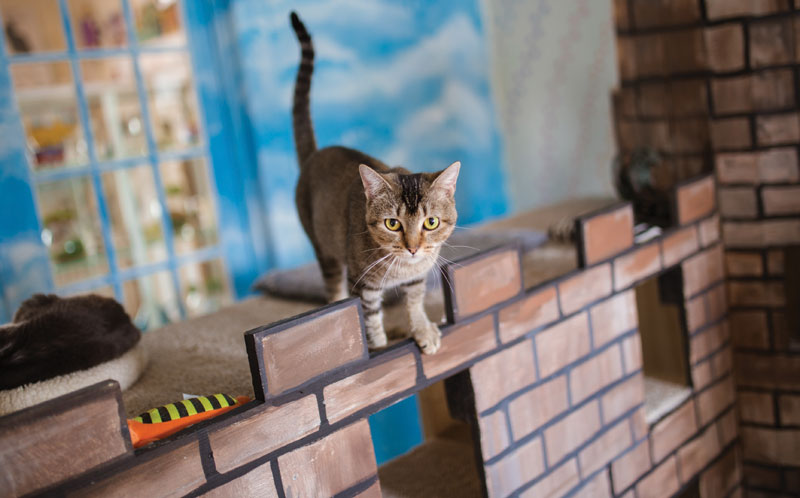 The idea of the “cat café” began in Asia a few years back. The world’s first cat café, Cat Flower Garden, opened in Taipei, Taiwan, in 1998. The Taiwanese cat café eventually became a tourist destination, attracting tourists from Japan and all over the globe. Though the origin of cat café is in Taiwan, it really took off in Japan, where the first one was opened in Osaka in 2004.

Originally, the theme of a café whose attraction is cats was so that busy people could pay a fee to watch and play with the cats without the permanent commitment. Japan is a crowded country, and many residents live in small apartments or condominiums where pets are not allowed. Workers could go to a cat café for the companionship and comfort offered.

Cat Café has been officially recognized in the Oxford Dictionary since 2015.

Cat Cafes have been popping up in North America since 2014 as a tool for pet adoption. Thousands of animals have been adopted through their efforts.

At Give Purrs a Chance, founder George Farnham says people come from miles around.

“Most of the cat cafes are in major cities,” says George. “We’re the first one in a rural area. We have more cats than others, and we have the biggest square footage.

“Their temporary home is a large five-bedroom Victorian home in the heart of Berkeley Springs. Adult cats have the full run of the house. Kittens are kept in two bedrooms.

He says there are around 75 such cafes in the U.S., but there is no formal organization overseeing them. Each one is independent.

“It’s the wave of the future,” he says. “We’ve adopted out 90 cats in a little over six months. We opened Mother’s Day weekend.

“Give Purrs a Chance is a 501c3. George is founder and president. His board members are Jackie Lewis, who used to own a pet supply store, and Laurie Fischer.

Adopting out 90 cats in only six months of operation is a great record. George says the closest other cat café, in Washington, D.C., adopted 125 their first year of operation. Statistics vary, with some helping 25 in the first year or on average, 100.

He believes he knows why Give Purrs a Chance has been so successful. They partner with other rescue groups in the local area like Friends Fur Life, who rescue/foster cats and dogs. He says they’ve adopted out 12 cats for Friends fur Life. And, they work with two small rescues in Maryland.

And, all cats, including strays or ferals in some cases taken in by the rescuers, are vet checked. They must be tamed and socialized to live with other cats and humans before going to Give Purrs a Chance.

“We want them socialized to other cats and preferably dogs,” says George, “before they come to us. They’re already adoptable when they come here. We might have as many as 50 cats at a time. They get along with each other, and that’s a primary reason we’ve been successful.”

He says many people don’t expect to adopt when they come in the door, perhaps out of curiosity, but the café’s average is three adoptions a week. Social media helps. He says they have a strong presence on Facebook and other social media. They attract cat friendly folks and travelers.

“We’re in a tourist town, and get a lot of visitors from Baltimore, Washington, Pittsburgh, and all over the region. We’ve sent cats to Indiana, Ohio, all over.

“Most other cat cafes adopt out locally. Most of Give Purrs a Chance’s adoptions are out of state. Only about 20% of adoptions are in the Eastern Panhandle. Nearby Virginia is a popular adoption destination but he doesn’t know why.

“I live near the Virginia line,” he says, “and we’ve had five different adoptees take 13 cats to Cross Junction. Some end up less than three miles from my house.

“Any way one looks at it, they’ve been very successful in a short period of time. Of course, they are in a tourist town. And, the cats are well cared for, loved, and have the run of the large home. It’s a cat paradise with all the toys, climbing spots, and room to play or run. Or, perhaps it’s word of mouth and the dedication of Give Purrs a Chance cat lovers.

Give Purrs a Chance even features its own yoga studio with regularly scheduled classes for a fee. Friday nights are acoustic music nights with the cats. Saturday nights go dancing with the cats. They have a Catique Boutique with hundreds of donated items for sale both vintage and new, and they’ve contracted with many local artists and craftspeople to display cat items in the building at a 20% commission rate.