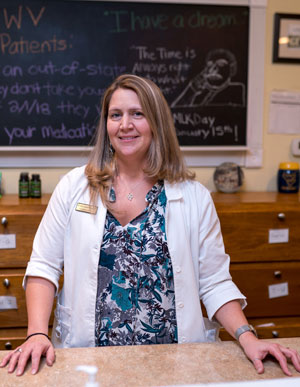 She considers herself to be a translator. No, she doesn’t work for the United Nations or for an embassy in Washington, DC. Kristine Knott, the owner of Shepherdstown Pharmacy in Shepherdstown, WV, says she works to translate what doctors say or fail to say to their patients.

Knott, who technically is Dr. Knott having earned her Doctorate of Pharmacy Degree from West Virginia University in 2002, says doctors are sometimes too busy to talk to patients.

“We are approachable and accessible to our customers,” Knott says. “We talk to them about their prescriptions. We also talk to doctors to make sure nothing is overlooked like allergies. It’s good to have several eyes, multiple checkpoints.” Knott even made sure the physical layout of the pharmacy was conducive to communicating with customers when she started the business in 2011 with husband Luke, who assists with bookkeeping and other duties as office manager.

“We can all see people as soon as they come in,” Knott says. “My staff is within earshot of conversations. I’ll eavesdrop to make sure we know what’s going on at all times. It’s like an old-fashioned pharmacy. We know everyone and they know us. We’re nice to people, which is a dying service. We try to be like the traditional pharmacy people remember. We don’t have the soda fountain kind of counter, but we try for the same feeling.”

Knott says the fact that many of her customers travel miles out of their way to come to her pharmacy attests to the quality of work the pharmacy offers. “We get them their prescriptions in a timely manner, as well as making sure those prescriptions are correct and customer questions are answered. We let people know when they are due for vaccinations, too,” Knott says.

Shepherdstown Pharmacy also offers its customers a variety of medical equipment supplies other pharmacies don’t such as knee braces, wheelchairs, canes, walkers or blood pressure monitors. The staff will assist customers in picking out the right product, as well as helping customers use products like nebulizers, a drug delivery device.

Knott says her pharmacy is also the only one in the area that carries shoes for diabetics.

“The shoes have special inserts that prevent slippage and wider toes,” Knott says.

The pharmacy is a Diabetes Specialized Care Center. Staff can provide extensive training, expertise and the tools necessary for diabetic patients. Most major insurance carriers and government programs such as Medicare and Medicaid are billed for the service. The pharmacy carries a wide range of meters and other diabetes supplies with varying technology levels. Staff can determine the best options for diabetes management. Customers can be trained how to use diabetes equipment like monitors and test strips.

The staff can help customers to keep their hearts healthy by assisting them to create and maintain a plan using diet, exercise and monitoring blood pressure.

In addition, Shepherdstown Pharmacy has a compounding service that can customize the strength or dosage of medication. By working with a customer’s doctor, medications can be devised to avoid preservatives or dyes that may cause allergic reactions or use a different type of dosage form like capsules or liquid drops. Medicine can even be flavored to improve taste.

Knott says her staff is another reason customers keep coming back.

“They are really good at what they do,” Knott says. “We treat people the way we would want to be treated.”

The pharmacy has six full-time employees, and three part-timers. Along with Knott, the pharmacy has a second pharmacist Sarah Knipe. Knott says her staff members have remained with her over the years.

“I think the longevity of their stays here is another plus. Sarah started with me when she was a sophomore in high school. Now she’s a pharmacist,” Knott says.

Shepherdstown Pharmacy offers a medication review service where staff members review a customers’ prescriptions and provide tips on side-effects, usage, impacts when paired with another prescription or over-the-counter product.

“Even though a prescription has paperwork attached to it with a lot of information about the drug, many people still need help. For example, do you take the drug with food or before eating? That’s not listed on the bottle all the time.”

Knott says her industry has experienced huge changes over the years. Many insurance companies specify what pharmacies a customer can go to. In addition, customers may have to have mail order prescriptions as part of their insurance plans.

One thing Knott says she misses is the fact that customers rarely have hard copies of their prescriptions.

“They don’t see the dosages and other information. Most doctors send prescriptions electronically. Mistakes can be made in cyberspace. The customer won’t know that,” Knott says.

A career as a pharmacist was not in the cards as Knott was growing up. She was raised on a dairy farm in Berkeley County, not far from her pharmacy.

“I wanted to be around people. People talk. The animals didn’t. People actually have opinions,” Knott stated.

Following her graduation from WVU, she spent two years working for a small chain pharmacy. In 2004 she began working at a local independent pharmacy and realized that running an independent pharmacy was one of her goals. She and a partner opened Reed’s Pharmacy in Spring Mills, WV, in 2008, then Shepherdstown Pharmacy began three years later.

“I really wanted to have a more flexible schedule to spend time with my family. My kids kept saying I was never home. My schedule is better now.” Knott has two children Paige, 9, and Cooper, 10.

She says her business is very family oriented. She does what she can to educate the public to improve their health. She works with the Wound Unit at Berkeley Medical Center in Martinsburg, WV, for example.

She admits her pharmacy is small and hopes maybe one day to have a drive thru.

“I think we have a fun environment. Since we’re located in a small strip mall, people can go to places like the Dollar General and shop while they’re waiting for a prescription,” she says.

Shepherdstown Pharmacy is located at 7670 Martinsburg Pike. Its hours are Monday to Friday, 9 a.m. to 7 p.m.; and Saturday from 9 a.m. to 2 p.m. For more information, go to the website at shepherdstownrx.com.