It’s Not Just a Pizza Place 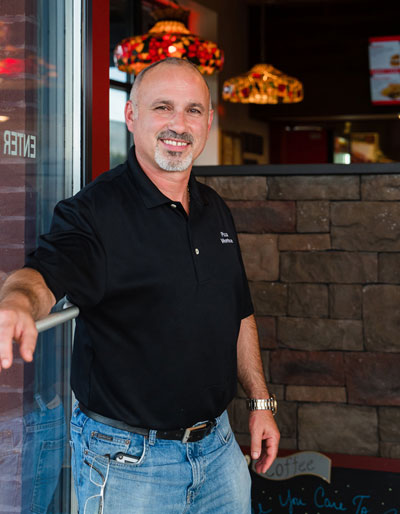 Fresh is part of the name of Montese’s Fresh and Fast restaurant in Martinsburg, West Virginia,  because it reflects not only on the quality and variety of food offered, but also on a refreshing approach to business and customers.

Montese’s owner Mike Schianodicola, hails from a family in Monte Di Procida, Italy, outside of Naples. His passion for cooking started at an early age, acquired from his father and mother, Mario and Archina.

“I was always around good cooking. When I go back to visit my parents in Italy, I usually gain eight pounds in ten days,” Mike says, smiling.

Still, cooking was not immediately part of Mike’s future. He planned to go to school to learn how to be a captain on a cruise ship.

“I thought that would be an exciting career, until I realized I would be away for three or four months at a time. I wanted to be home every night. Have a family,” Mike says.

He came to the United States in 1984 to work on his culinary skills with his brother Raimondo. In 2008, he opened Montese’s, named after the nickname of his Italian village. He started out concentrating on pizzas. The kind of pizzas customers order feature just about any topping imaginable. The list for toppings includes pepperoni, mushrooms, sausage, onions, bacon, green peppers, black or green olives, fresh tomatoes, broccoli, spinach, banana peppers, pineapple, meatballs, ham, steak and chicken. There is even a peanut butter and jelly pizza. For dessert, customers can order a chocolate chip pizza, or pizzas topped with Nutella, cherries, apples or Oreos.

“Our pizza dough and the sauces are made fresh every day. We take great pride in the quality of our food,” Mike says.

He has gluten free dough. He adds he will eventually start offering cauliflower dough. One of the most popular pizzas is the Greek pizza (feta cheese, fresh tomatoes, fresh garlic, olive oil, fresh spinach and mozzarella cheese).

“Good for the heart,” he says.

Still, Mike wanted to offer his customers even more.

“I didn’t want to be just another pizza place. I know children love pizza, but I wanted to offer adults a choice, too. I didn’t want people to have to think too much when they are trying to decide what to order. That’s why I added a buffet,” Mike says.

Fresh especially comes into play with the buffet, which is All-You-Can Eat. It’s beautifully and enticingly presented. The lettuce tastes as if it was just picked from the garden. Spaghetti and a delicious sauce are among the delights awaiting buffet tasters.

A particularly delicious morsel is the pepperoni Stromboli. These little bite-sized items give you a tiny sample of the delicious dough used in so many of the other items on the menu. Pieces of pepperoni are wrapped in the dough. Diners can order a larger Stromboli if they wish made with ham and cheese; a veggie Stromboli with mushrooms, peppers and onions; or a steak Stromboli with steak and sausage. Or try a calzone, an oven-baked folded pizza stuffed with ham and ricotta cheese.

Customers can also have fresh salads made for them like shrimp salad with Romaine lettuce, red roasted peppers, and olives or Greek salad with Feta cheese, cherry tomatoes, carrots, cucumbers, red onions and olives.

A variety of subs, wraps and Paninis are also on the menu. Some of the subs and wraps available are ham and cheese; turkey and cheese; a hoagie sub or wrap consisting of ham, salami, and Provolone cheese; veggie and cheese, grilled onions, mushrooms, Green peppers and black olives; and meatball parmigiana.

Customers can have their choice of any sub, wrap or Panini in Lunch Box Combos that come with French Fries, onion rings or chips and a drink. Also, recently added, a pick 2 on the menu, consisting of a choice of sandwich or personal pizza and a variety of salad or soup.

On Wednesdays from 4 p.m. to 9 p.m. there’s a special featuring All-You-Can-Eat wings. Wings can be seasoned with hot, mild, BBQ or Old Bay.

Now to desserts. Besides the special dessert pizzas, customers can have their choice of soft ice cream and add sprinkles. A little machine in the back of the restaurant lets customers serve themselves. There is also that wonderful Italian dessert cannoli. Cannoli are pastries that consist of tube-shaped shells of fried pastry dough, filled with a sweet, creamy vanilla filling.

Montese’s can seat about 95 people at tables or booths. Montese’s also has a delivery service. There are 15 employees, including Mike’s son Raimondo who is manager. Mike and his wife Jenny have seven children.

Another son Mario is a youth pastor in a local church. This is another important part of Mike’s life. Mike’s devotion as a Christian is something else that’s fresh and new for a small business owner.

Mike considers Montese’s to be a family business, family friendly with great food at affordable prices. He also works to serve the community, helping with fundraisers to help the needy.

Mike is also devoted to his new country: the United States. He became a citizen in 2009.

“I love this country. It’s always good to go back to Italy, but the United States is my country now,” he says.

Mike is a warm and caring host, as well as a businessman who has a positive and happy attitude who just wants to make his customers happy, too, and comfortable, but through it all, Mike believes that serving God is the best choice you can make.

Montese’s Fresh and Fast is located in Spring Mills Center at 5724 Hammonds Mills Rd. Check them out on the website at www.monteses.com.