Moses “Moe” Herr admits he doesn’t even really know how to cook.

But what he does know is a good tasting donut.

Herr has brought a new type of fluffy, soft donut to Martinsburg serving them up at Moe’s Donut Shop. The shop is at 321 Aikens Center off of Edwin Miller Boulevard.

Donuts came at time when Herr wanted to leave the corporate world and was looking for a new business opportunity. 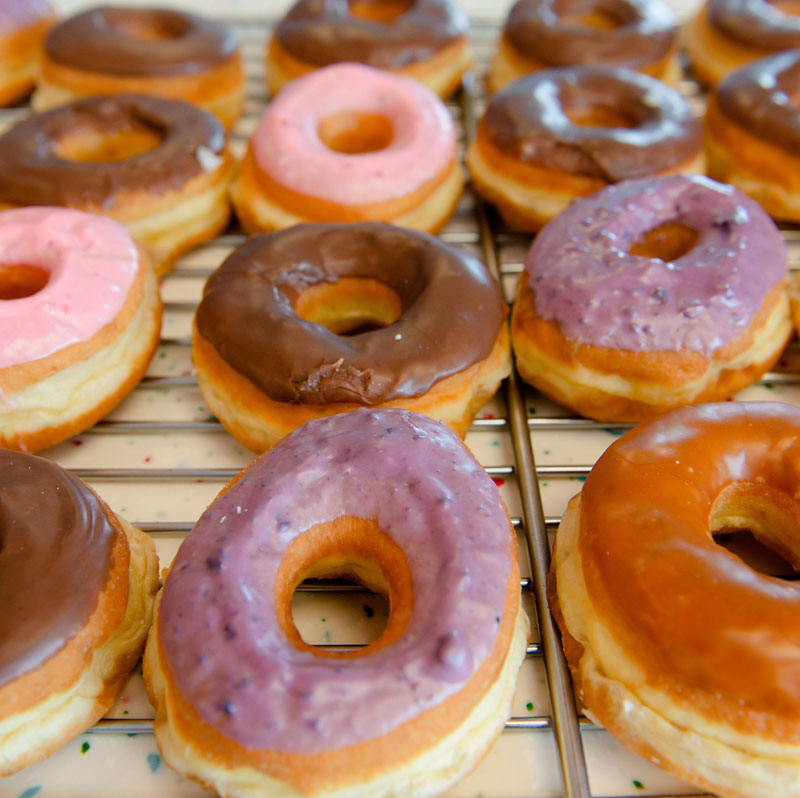 Herr, who grew up in Northern Virginia, was living in Texas at the time. He had been working as a process analyst when he thought there had be something different to do.

That’s when he discovered donuts. In Texas, he says, independent donut shops are all the rage.

“They’re on every corner basically,” he says. “It was pretty saturated.”

Herr did some research and had found two shops. One was practically behind his home and had a great product, while the other had a great location but a lousy location. He opted for quality.

“The ultimate goal was to bring this concept back to the Northern Virginia back where I was because there was no donut shops,” he says.

“I learned what I learned now from the owner of that donut shop,” he says.

The recipe, he says, is one that’s basically used at all the donut shops across Texas.

The secret, he says, is in the different techniques and ratios used to make the donuts.

“We can use the same product, but I might be able to use the same donut because I use more water or something like that,” he says. “My donuts are a little different how my teachers were. You’ve got to make it your own.”

It took time for Herr to learn how make the donuts correctly and says with a language barrier some steps he had to figure out himself.

“I made a lot of mistakes the first year,” he says.

It took about 10 years before he decided to see if he could locate a donut shop with the Texas-inspired donuts close to his hometown area.

In July 2017, Herr opened his first shop at 28 E. Picadilly St. Winchester, Va. And in November 2018, he opened the Martinsburg shop in the small building with a drive-thru that once housed a Rita’s Italian Ice.

What sets Moe’s donuts apart is the texture, Herr says.

“In general they’re pretty soft. They’re nice and fluffy. I have a lot of customers say they’re eating clouds of air. You can eat 10 and not feel too guilty ,” he says with a laugh. “Donuts nowadays are pretty thick and kind of bready, you basically eat one and you’re kind of full. Mine, you have a lot of different flavors, you can finish one and try another different flavor.”

There are a variety of flavors of in either cake or yeast donuts such as chocolate, maple, lemon, strawberry, blueberry lemon and peanut/coconut. Herr prides himself in the fact that their icing is not just colored icing, but actually flavored icing. They also offer eclairs that come in different icings such as chocolate, peanut better, caramel, cinnamon, and customers can watch as they’re stuffed with the flavoring of their choice such as apple, raspberry, white icing, Bavarian cream or lemon. Moe’s also offers donut holes.

The most popular donut is the blueberry cake donut as well as the regular glaze donut.

“That’s how you base a good donut shop, you try their glaze donut and determine if you want a new donut or not,” he says.

Donuts are made fresh every morning at the Winchester location because the Martinsburg location doesn’t have the square footage for all the equipment.

“We bake two separate batches the first one is strictly for Martinsburg, as soon as that’s done. I have two bakers help me. They start on the batch for Winchester,” he explains.

Donuts cost $1.09 a piece or $10.99 a dozen. Those who want more than three dozen, Herr suggests calling in an order so they can guarantee the number of donuts.

For Herr, it’s watching people when they experience a Moe’s donut for the first time.

“We always enjoy just the look on their faces when they take that initial bite,” he says. “That’s the kind of experience that makes us feel really good.”

Herr says eventually he’d like to go his home area of Loudon County, Va., but he says the rent is ridiculously high and he doesn’t want to have to pass along the cost of additional overhead to his customers. However, he is currently talking to agents to see if they can find a location that fits his needs.

Herr would one day like to see Moe’s donuts across the U.S.

“I believe in my own products. Everything that we make I want it to be the best, it’s pure quality,” he says. “That’s what I want everyone to taste. It’s also the environment. I like everyone feeling like family, whether you’re a one-time customer or one just passing by. I want everyone to enjoy our products and put a smile on a kid’s face.”

Family is important to Herr, 38. He lives in Leesburg, Va., splits his time with his family who still lives in Texas. He and his wife of more than 10 years have an 8-year-old son, a 4-year-old daughter and a 1 ½-year-old son. He says his wife does the backend of the company.

For Herr, he’s hoping that people will fall in love with Moe’s donuts.

“I truly believe we have some of the best donuts out there. I want everyone to stop by and give it a try. We’re their friendly neighborhood donut shop,” he says.