MARTINSBURG, W.Va. — Barrington Mighty was only 30 when he suffered a heart attack.

Mighty, now 32, says the experience changed him while sitting beside his girlfriend Roxanne Wiggan, 29, in their downtown Martinsburg restaurant, Island Bliss Cuisine.

“She watched me literally flatline and come back,” he says. “I decided I’m here for a reason.” 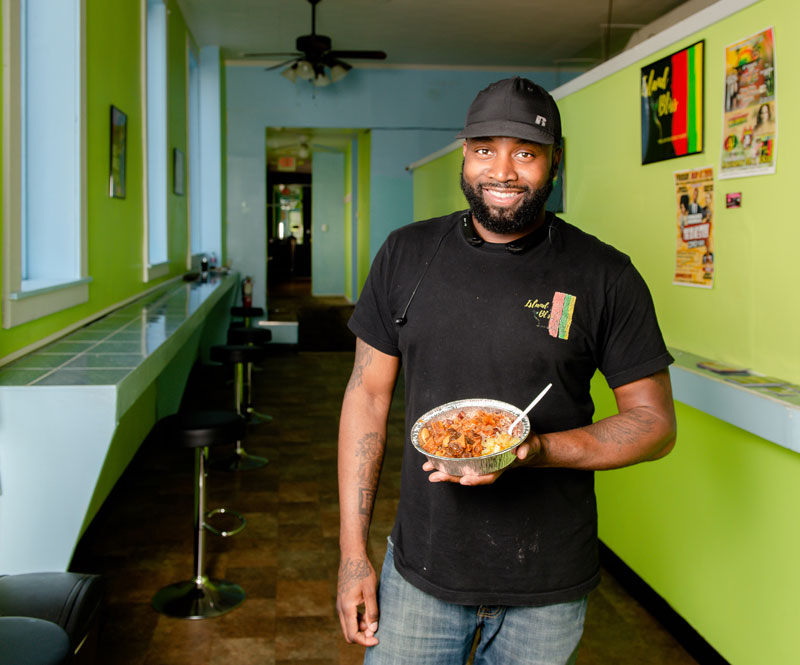 That’s when he founded An9ted Humanitarian Foundation based in his cultural home of Jamaica. Every month the group goes out to different parts of the country to cook hot food to feed anyone who needs a meal.

“We walk on the streets and find them, and give them something to eat,” he says.

The last place they served meals was in Kingston, Jamaica. But on June 9, Mighty wants to bring the outreach to their newly adopted city of Martinsburg. The event will be 1 to 4 p.m. at Ambrose Park in Martinsburg.

“We’re feeding the less fortunate in the community and have a fun day for kids,” he says.

Mighty and Wiggan are the parents of two, Tristan and Emily, both 8. They also have another daughter due in August whom they’ve already named Destiny.

“When he had the heart attack, he had friends who weren’t there for him,” she says. “He cut out bad company and he’s now more family oriented. He’s appreciative. He spends more time with God.
Before, I never heard him say anything about praying. It changed him a lot.”

Mighty nods. “I realized I was here for a reason.”

Mighty and Wiggan have family who live in the Eastern Panhandle and would visit the from New York City. But when they visited, Wiggan says they could never find any good Caribbean food.

“One day on the back porch he said, ‘I think we should move down here and option a restaurant because I think it would do very well,'” she says. “We decided to bring it here. We wanted to bring something different to the area.”

Mighty says he learned how to cook by watching a friend who had a restaurant in New York.

Then he’d put ” my own twist on it by making it different from everyone else’s,” he says.

Being in the kitchen, Mighty says, became a passion.

“Cooking was something that I really enjoy doing. It just became a part of me,” he says.

In 2012, he opened up his own New York City restaurant called Tristan’s Caribbean Cuisine. Prior to opening his first restaurant, Mighty did electrical work for a solar company. Later, he worked for Manhattan Electric while still doing caterings.

After realizing that a culinary hole needed to be filled in the Eastern Panhandle, they moved to West Virginia in December 2018, and then opened Island Bliss Cuisine on Feb. 1, 2019.

Inside there are few tables and a long bar to eat at near the front counter. The walls are painted with bright colors and decorations on the wall remind people of its Jamaican roots like a poster of the late Bob Marley.

Wiggan says when they held their grand opening, they were worried no one would show up because the area had been blanketed with snow. But, she says, people started coming in and ordering Caribbean staples.

And, they say, they take their tagline “The Joy in Every Taste” to heart.

Both Mighty and Wiggan are of Jamaican descent and the menu reflects that complex level of flavors.

“The spices and flavors that we bring are totally different from Southern food,” Mighty says.

Wiggan agrees. “Caribbean people use all different kinds of spices that I would say that America, as a whole, don’t really use. We try different types of meat and we do it different ways.”

They also bring the traditional Jamaican escovitch, a vinegar-based sauce that is spicy and for those who really want spice they can request that the addition of a Scotch bonnet pepper.

Mighty is proud what he serves from the traditional ox tail and jerk chicken, to something with a little more familiar like red velvet waffles and chicken. He posts pics of his food often on the business’ Instagram account @islandbliss_cuisine.

Wiggan says her favorite dish is the jerk pork.

“The taste he gives that jerk pork it’s like back home and I’ve never had it like that from anyone here,” she says.

She says it’s that taste that makes their restaurant stand out from others, as well as the consistency of the level of food they put out.

For those who have a misconception about the level of spice in Caribbean food, Mighty says that isn’t the case at all

“If you want it spicy, then we give you pepper sauce to make it spicy at your own risk,” he says with a small chuckle. “Everything we cook is mild.”

He says he hopes customers who come to his restaurant experience what the tagline says, “”The Joy in Every Taste.”

Mighty does have his eyes on the future. Currently, the restaurant’s main business has been carry-out, but they want to renovate the dining room to allow for more family dining seating. They also cater events. Eventually, he’d like to expand his brand.

“My dream is to have more than one of these, but we have to creep before we walk. It starts here, then from here onto bigger and better,” he says.

But what Mighty really wants is to build a legacy for his family.

“For me, everything I do is for the kids. It’s something for them to inherit and make it even better,” he says.

In the meantime, Mighty is looking forward to the June event. They’ll be a team of him and about 15 volunteers to help make food. It’s a tradition he wants to continue locally. He also wants to host a back-to-school event later in the summer.

“Back then I took a lot of granted before my heart attack. I was seeing people basically out there having nothing to eat, eating out of garbage and we’re throwing out food like it’s nothing,” he says. “I received my blessings through giving.”

Info box
Island Bliss Cuisine is at 301 W. King St. in downtown Martinsburg, W.Va.
Phone: 304-264-4001
Hours: Tuesday through Saturday, 10 a.m. to 8 p.m.
Delivery is available within a 10-mile radius
Find them on Instagram at @islandbliss_cuisine or on Facebook www.facebook.com/islandblisscuisine
For more information about An9ted Humanitarian Foundation follow them on Instagram at @an9tedhumanitarianfoundation