Luke Loy has been using his talents with hair and cosmetics to make his clients at Hair by Luke beautiful for the past 25 years. “But I want to help people who come to me to be beautiful on the inside as well as the outside. I want them to have better lives and encourage them every day,” Loy says.

“I’ve always loved decorating. I want that beauty to also be a part of the people who come to my salon. They are walking billboards of my work,” Loy says, smiling.

Making others feel good about themselves helps Loy, too. 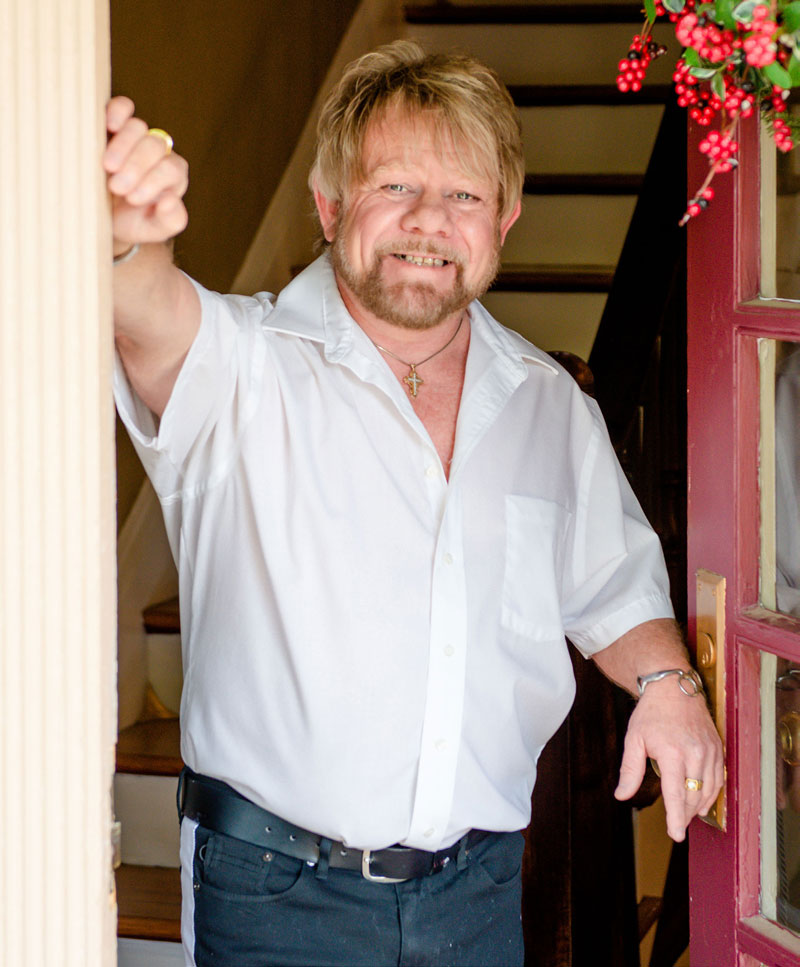 “It makes me feel good about what I chose as my career. I am a Master Stylist with a gift for designing styles and color just right for my customers. When life gets you down, come in and see me,” he says.

Loy says he has very high expectations when it comes to goals for both himself and his clients. He strives to make his customers as comfortable as possible. He talks to them, listens to them, and even gives them inspirational quotes he has lived by all his life. He also doesn’t let his customers be swayed by many of the fads taking place in the hair styling world, like having their hair dyed in different colors like pink and blue.

“The colors fade too fast. Not attractive and not good for the hair,” Loy says.

“I’m here for the customer’s convenience, not mine,” he says.

Originally from Leetown, West Virginia, Loy received his training at the International Beauty School of Martinsburg. He tried massage therapy for a while, starting one of the first massage therapy businesses in Berkeley County West Virginia. Along the way in his career, for six years Loy was involved with the TLC television reality series, “Gypsy Sisters” and “My Big Fat American Gypsy Wedding.” Both shows, based on those made in the United Kingdom, follow the little-known gypsy culture of the Romanichel and Roma gypsies. Those involved have their shining moments, outrageous parties, huge dresses and big attitudes. Viewers saw coming of age parties, arranged marriages, purification ceremonies and a Veil of Darkness wedding ritual. Gypsies have their own customs and superstitions vital to the survival of their mysterious culture. The shows explored the unique and ancient traditions that have shaped and defined the Gypsy community for hundreds of years.

There are only about one million gypsies in the United States.

“I got to know the family members’ grandparents who were the stars of the gypsy sisters’ show when I was 15 years old.” Loy says.

Loy has not only ventured into the world of television, he is a published author as well. His recently published book, “Be Good to Yourself, Kind to Others,” is filled with his positive thoughts and positive attitude toward life. He expects his second book, “My Life Behind the Chair,” to be published next year.

His enthusiasm and joy and love for his customers is almost a miracle in itself, considering the incredible challenges he has had to face throughout his life. He was diagnosed with Degenerative Disk Disease, has had bladder cancer, and has also been paralyzed twice in the past nine years.

“When I couldn’t stand up, I would style and cut hair while lying on the floor. My customers would lie down with me. I have been blessed with people who continue to come to me year after year,” Loy says.

“Don’t give up. We can’t be negative in life. You have to overcome it,” he says.

Loy says he has always had a fascination and love of angels. He tries to be an angel in the life of those who come to his salon, as well help out in the community as much as he can. He holds free yard sales during the year.

“We ask people to donate clothes, shoes, coats but no household items, no mattresses or old TVs. People can bring items like shampoo, bath soaps, deodorant, toothpaste and laundry detergent. I appreciate everyone who has been involved in the past. We offer free food, too. We just never know if the people who come…this may be their only meal of the day or even the week. We all pull together and help as many people as we can. We have to give to get back,” Loy says.

In addition, Loy gives free hair cuts to homeless people throughout the area. He recently offered his service to the homeless in Hagerstown, Maryland.

Last Christmas, Loy had an open house for the public. His home was fully decorated inside and out with 14 Christmas trees. Loy says while many were decorating for Halloween, he was putting up Christmas decorations He had Mrs. Claus and Santa Claus on site with someone taking pictures of all the children sitting on Santa’s lap. He had a room set up to look like a toy store and another room filled with refreshments.

“All the kids left with a free gift. At one point in the night, the DJ was playing Christmas music. The whole house was singing together. I had tears in my eyes to see so many people in one house with so much love for one another. I only want to help the community as much as I can and make memories for kids,” Loy says.

Loy says he truly loves his work. He has helped others who might be considering going into the hair styling and cosmetics business by talking to them and encouraging them to stay in beauty school.

“Many start school but never finish. This business is so rewarding because you make others feel good about themselves, but you have to be able to sell yourself and your work. Never limit yourself.

Learn different skills, makeup, hair, nails. Build up your clientele. And do a good job. Your name and your reputation are everything. Your reputation starts in this business when you are in beauty school so dress and look the part,” he says.

Loy also says take the time to listen to clients.

“Don’t make them feel you are rushing them to get them done, but remember they don’t want to sit in a hair salon all day either,” he says.

Loy adds that among his blessing is an amazing mom.

“She has supported me in all that I do in the business and the many community events,” Loy says.

Even though it would appear to those who don’t know him that Loy should value outer instead of inner beauty since that’s where his primary work is, his dedication to his clients and his community speak volumes about his character. As entrepreneur and evangelist Steve Aitchison once said, “Your outer beauty will capture the eyes, your inner beauty will capture the heart.” Words that Loy truly lives by.

Hair by Luke is located at 445 Winchester Avenue. He can also be found on Facebook, Hair by Luke.