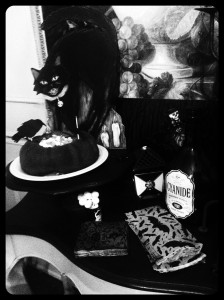 By Lisa Bartell of Wisteria Cove

The wind whispers on a crisp October evening. Costumed children scurry up sidewalks crunching leaves under anxious footsteps, chattering and giggling with excitement about the sweet treat they will receive from the next house in neighborhood. Halloween is here!

Oh what fun! My house is fully decorated inside and out, mounds of treats ready to be handed out. Baked potato soup is bubbling on the stove — a family tradition that warms the bones.

We wholeheartedly enjoy Halloween at our house and go all out with the decorations. Our Halloween decor is vintage, not the blood and gore you see at some of the stores. It’s much more exciting to use your imagination to give yourself a fright. It’s the unknown that really gives you goosebumps. Whoâ€™s lurking behind the closet door? Is there a monster under the bed? Did you hear footsteps? Is something hiding behind the curtain? It’s all in good fun, with a few bats, cobwebs and skeletons thrown into the mix.

In the 1880s to 1890s, the Victorians put a romantic twist on Halloween, secretly competing to see who could have the more elaborate Halloween party. They tried to outdo each other with more food and more decorations. They also played lots of Romantic parlor games. From getting your fortune told by spinning a wheel or picking a piece of paper out of a box that might say, “You are going to meet your beau this very night.” Another game was played by blindfolding a female and spinning her around, then pointing her in the direction of a group of single suitors. Whoever she touched first would get a kiss. Lastly, spooky stories were told. Victorians of this time would decorate with mostly what nature’s bounty offered up. This is continued this very day with cornstalks, pumpkins and gourds. Other decorations they used (mostly paper goods) were imported from Germany and sold here in America.

By the early 1900s Halloween in American was becoming more child oriented. Manufacturers in America started producing their own Halloween decorations that were mostly made of paper with Halloween images on them such as black cats, jack oâ€™ lanterns and witches. The Dennison Company was one of the leading manufacturers of Halloween products during this time. Halloween was becoming so popular that the Dennison Co. put out a yearly magazine just for Halloween called the “Bogie Book” (these magazines are highly collectable today) starting around 1910. The magazine was full of costume and decorating ideas for this spooky holiday.

Another leading company during that time is still in existence today, and is in our very own back yard. Located in Shippensburg, Pa., the Beistle Company is now over 100 years old and is one of the oldest and largest party product producers in the country. Even though it is producing Halloween products for current times, it has brought back its vintage Halloween lines from times past to offer to its customers. In addition to paper products, manufacturers started producing noisemakers such as horns, clackers and tambourines. In the 1930s American companies were making jack oâ€™ lanterns out of papier mÃ¢chÃ© on the thought that consumers could use them from year to year instead of carving new ones. By the 1950s jacks were made out of plastic and lit with a bulb attached to an electrical cord.

A Halloween party or trick or treat would not we complete without a costume! Costumes grew very popular in America in the 1880s and have continued to grow. Many children dressed in homemade costumes created from directions from women’s magazines. The Dennison Company was also one of the first manufacturers here in America to make and sell Halloween costumes. These were mostly made of crepe paper and were only meant to worn once and then disposed of. In the 1930s the Sears and Roebuck Company offered their first ready-to-wear costume. By the 1940s many companies were offering their own version of the Halloween costume which consisted of a complete costume with mask in a box; the average price was around $3. Popular themed costumes for the 40s and 50s included comic book and Disney characters along with pirates, witches and skeletons.

Trick or treat bags during this early time were usually a cloth sack or basket found at home. By the 1930s manufacturers were producing paper and or cloth bags depicting Halloween scenes. In the 1950s stores began having Halloween bags made with their own logo printed on them and giving them away for free. Thus, every trick or treater would be advertising their store Halloween night.