Home » Articles » Because Life as a Working Parent is Hard Enough 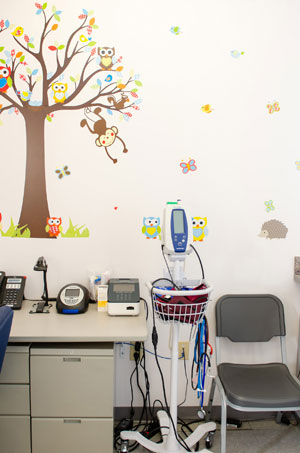 HAGERSTOWN — The names are different but the scenario is often the same: Bobby seemed fine when he was sent off to school, but now it’s after dinner and he’s complaining of an earache and is starting to run a fever.

A parent has to make a decision: Is it bad enough to spend hours in the emergency room or in urgent care? Likelihood there isn’t a pediatrician on call at either who were trained to deal with the ailments of children.

And it’s exactly because of that struggle is why After Hours Pediatrics in Hagerstown opened.

Pediatrician Dr. Anand Budi, a founding member, managing partner and medical director of the business, always had the dream of having a space to treat pediatric patients separately from adults.

He had been working in Hagerstown since 1998. He was required to serve an underserved area in order for the New Delhi, India-born Budi could obtain his green card. He said he thought he would be in Hagerstown for three years and then move on, but he found himself invested in the community.

That’s when Budi decided that as “a group of pediatricians, we should help the kids in the community by providing the right care and keep the cost of medical care as low as possible for not only the families, but also generally speaking for the insurance companies as well.”

In 2009, Washington County Hospital received a new name as Meritus Medical Center and was moved to Robinwood Drive. Budi served from 2009-10 as Meritus’ chairman of Pediatrics. With the new location, he said, the emergency room had tripled in size.

His hope was with the larger space, he could have not only have designated pediatric beds for children that were separated from the adults but be staffed by pediatricians who specialized in treating children.

“That way we take care of pediatric patients and they don’t get unnecessary X-rays or antibiotics, lab work and blood work,” he explained.

The idea, too, was to allow ER doctors to focus on what he called “real emergencies.”

In fact, Budi researched the impact during a five-year period. At that time, he said, the medical center was getting about 88,000 medical visits total, which increased significantly with the new hospital. Budi explained of those visits, 10 to 14,000 were pediatric patients, and 75 percent of those patients would present the same thing they would at a pediatrician’s office like a cough or cold.

With all the time and effort Budi had invested into the idea, he said he decided to “put my money where my mouth is” and started looking for a facility to open up his own pediatric urgent care.

He said he made a special point to talk to all the pediatric doctors in Washington County, Md., to ensure them that the urgent care would not be taking patients away but offering care to them when the pediatrician offices were closed. The reason was that Budi’s research showed that most of those pediatric cases that arrived at the hospital before midnight and often after the offices were closed.

“We thought we could bridge that gap and take off the brunt from the ER,” he said, noting that there were three urgent cares at the time.

After Hours Pediatrics, off of Eastern Boulevard, opened on Sept. 15, 2014. To staff, he partnered with two other pediatricians as well as got to other pediatric nurses and doctors to fill in the hours.

Budi said in the first few years it was a financial struggle, one reason being he made it a point to pay a higher salary to the doctors and nurses he hired. Today he has a pool of between seven and nine providers who share the shifts.

“The need was felt because we felt all urgent cares do not have a pediatrician and most people there do not have pediatric training,” he said. “And most pediatric patients were being treated as a half adult or a quarter adult, and we felt that was not the right way to see a patient.”

Budi found the gap for after-hours coverage for pediatric patients and he has seen it in the number of patients they serve daily. He said the first year they had three to five patients a day. Today, they are averaging between 18 and 20 patients a day. And of those patients, he said he only needs to send one to three patients a week to the ER because they don’t have the equipment to do such things as X-rays.

Why he is able to sustain himself in the community comes down to his principles when it comes to running his business. First, he said, they do not talk badly about other doctors or the hospital. Secondly, doctors are not allowed to solicit patients for their own practices. And to only tell the patient how to handle the current problem and to follow up with his or her primary healthcare provider.

“We also felt that if we are not providing any service to charge the insurance or make them pay a co-pay,” he said.

That means if the doctor looks at it and realizes the patient needs to go to the ER for an X-ray or other blood work, the patient is not charged by After Hours Pediatrics.

“We do that because we feel that’s a better way to do medicine than acting like it’s a business all the time,” Budi said.

He said the patient also benefits because if they come there during the evening hours to get treated during the acute stages instead of waiting until the next day, it often decreases hospitalization later.

“I feel overall the past four years, we have decreased hospitalizations for the kids and decreased the ER visits,” he said. “The ER numbers haven’t changed because the ER is able to focus on patients with their expertise and we are able to concentrate on patients with our expertise.”

Budi said they also keep the wait time down. He said during the winter, when it’s busiest, on a Sunday where they’ve seen upward of 60 patients in seven hours the wait time has only been an hour. Usually, though, he said the wait time is about 15 to 20 minutes on average.

That’s why he also appreciates Karen Talbert, business manager, because she makes sure the back-end of the company to make sure the staff can concentrate on their jobs.

“She has become the central pillar of our set up,” he said.

Budi is married to Lakshmi Budi, a family practitioner at Johns Hopkins. They have two children a 27-year-old daughter and a 21-year-old son.

And although his days of taking his children to their pediatricians are behind him, he hopes to continue to help those in the community. Because for Budi, it’s always been about the children.

186 Eastern Blvd N, Hagerstown
Call 301-302-7837
Hours: Monday through Friday 6 to 11 p.m.; Saturday and Sunday and holidays are 1 to 8 p.m.
Go to https://www.afterhourspediatricsofhagerstown.com/
Find After Hours Pediatrics on Facebook at https://www.facebook.com/AHPofHagerstown/