Three years ago when Jennifer Kearns first enrolled her sons, Mikey, 13, and Timothy, 11, into the program at Horses with Hearts in Martinsburg she had to cajole them into getting ready for their lessons.

That quickly changed when they connected with the horses. And today, Jennifer said, the boys are usually ready and waiting for her to take them to the lessons.

Kay Barkwill, along with Cathy Dodson, started Horses with Hearts. Barkwill oversees administrative duties while Dodson is the lead instructor and is a certified therapeutic riding instructor. 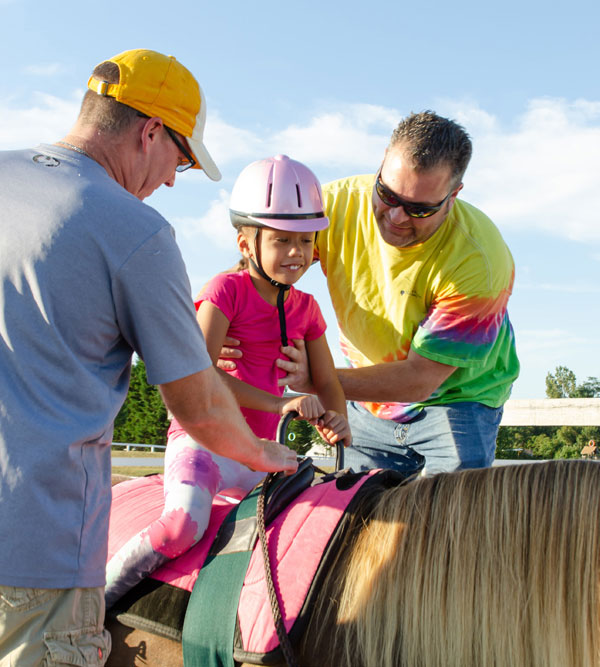 The organization is a nonprofit therapeutic riding program for children as young as 3 years old and adults with special needs. Horses with Hearts, which has been a 501(c)(3) since 2006, has helped hundreds of those with disabilities grow their confidence.

“Our motto is to create a smile, grow confidence and change a life, but our mission is to make sure every person knows they’re a person of great value. That’s our core,” Barkwill said.

“Our job is to find a way to adapt the situation so they can ride,” she said. “They have to have a documented special need whether that’s physical, mental or emotional. And with that, we have safely mount, maintain and dismount them on and off the horse. So even if they have a documented special need but physically I can’t safely mount, maintain and dismount them, I can’t allow them to ride. I also must have the right horse and the right volunteers.”

But it’s also the horses that are central to the Horses with Hearts’ mission. There are eight horses in the program, with 11 on the farm.

“They’re comforting and it’s good to be around them. I wanted to be able to share that,” Dodson said of the horses.

She said she’s seen horses sense that a child needs some attention and will go over and place its head in the lap of a person in a wheelchair or nuzzle a crying child. It’s not something she’s trained some of the horses to do, she said, it’s instinctual.

Their program has grown significantly since the early days, she said.

“It’s gotten somewhat bigger than we necessarily thought it would,” Dodson said. “We hoped it would get this big, but when we started we didn’t know a lot. We said ‘Let’s get it going and see how it goes.’ It’s just been wonderful.”

Jennifer said both of her sons have special needs. Mikey has Asberger’s, but the therapeutic riding is to help him give him something to enjoy. Timmy is autistic and has issues with his legs, which his mother said are alleviated by the riding.

Timothy said he gets a little excited when it’s time to come to their lessons. When he was asked what he liked the most about horse-back riding he said: “The height.” Prodded on what about the height, he replied, “Because it’s easier to see over my brother.”

“He gets the biggest smile when he trots,” she said. “I have so many videos of him doing that.”

Timothy also said he liked it when the learned how to play games with the horses such as ring toss.

“Our fourth time we were doing (the games) by ourselves. It was pretty exciting,” he said.

Mikey too said he liked to ride horses and do activities with the horses. He does admit, though, he wasn’t too keen about riding for the first time.

“I didn’t want to get on. I just wanted to sit on the couch all day,” he said.

Jennifer nodded. “We had to fight him to come. After the first season, it was OK. He didn’t open up, he was very closed off. Now, it’s like family out there for him. They complain about each other and they tattle on each other. They’re ready before I’m ready to go. “

Mikey said his favorite horse to ride is Tonto because “he was a funny horse.”

He said he’s now excited to come and ride. As for why specifically he looks forward to riding, Mikey said he didn’t know.

Mom has noticed not only more confidence in both her sons, but a difference in their mental and physical health. For Mikey he benefits from the emotional aspect of being with horses, which Jennifer said means she doesn’t notice as much seizure activity when he’s active, and she feels his mood stabilizes as well.

“We didn’t change medicines so I truly believe it’s the riding as soon as it’s stopped, the stress gets worse and starts acting again,” she said. “With Timmy the same thing, his legs start bending.”

For Timothy, that means he’s able to walk better.

Barkwill explained, that “the horse’s gait is as closest to a human’s walk. When you’re sitting on the horse, your body is using all of the motions and all of the movements it does when you walk.”

Jennifer said even though Timothy is in aquatherapy, it doesn’t move the muscles that horseback riding does.

“That’s why I’m excited about him getting back on the horse because if he’s on the horse he uses all his muscles. And his body doesn’t pick and choose, ‘Oh you’re not using your legs so we don’t need these hips.’ For Timmy, he uses a lot of muscles so he is tired afterward, but everyone sees the difference in how he walks and his posture,” she said.

Dodson said she sees a difference in the students as they progress through the program.

For Dodson, it “gives me a warm and fuzzy feeling because I feel like I’m helping and I’m doing something good for other people, and for me and for the horses.”

Horses with Hearts is an outdoor arena, which means they are limited in offering lessons during April, May, June, July, September and October. Each student is given six 30-minute lessons a week during the eight-week semester. They also are all-volunteer instructors, so it limits how many lessons they can offer.

That means for people like Timothy, he doesn’t see the benefits of riding when he’s not on top of the horse for the winter months.

And it’s because of people like Timothy is just one reason why Barkwill said Horses with Hearts want to build a new large indoor arena.

Immediate needs include a building to store hay, she said.

“The ultimate goal is to raise the complex, which I call the coliseum,” Barkwill said. “It will not only have an arena it will have a classroom, a sensory room, office space, conference room. It’s more than putting a tent over the ring.”

It will be able to allow them to have an area where they won’t have to be dependent on the weather to have lessons, Dodson said.

“An arena will take them from a part-time seasonal program serving 38 to 40 people a year to serving 200 a week in the physical, mental and recreational side,” she explained.

Dodson said she’s proud that they are at a point where they need to expand because that means their skills have strengthened and they have increased their knowledge about equine therapy.

“From starting with one horse and one rider at a boarding facility and moving around, getting the horses we got and having the farm we have now and keeping it running, it’s a lot of work and then coming out here and you’re tired,” she said. “But the feeling you get when the kids come and they’re smiling and happy. It just lifts you up. I don’t know where else I would have gotten that feeling or been able to help.”

“Once we get the equine specialist certification then when will be able to branch out to a mental health program,” she said.

They have made contacts with Mountaineer Recovery Center that is opening in Martinsburg. She said she had reached out to the Martinsburg Veterans Affairs Center as well.

Tana Burkhart, a board member, is one of the people who is earning her PATH certification. She also is the principal at Opequon Elementary School in Martinsburg. Barkwill said because of that connection they will begin a pilot program where students will learn team-building, trust-building and communication skills.

She said when it comes to the emotional aspect of working with horses is “to be accepted, to feel successful, to feel honored, to feel valued.”

That’s why, she said, she wants to branch out into helping those with bereavement, trauma or post-traumatic stress disorder. After that, she said, they would like to have physical and occupational therapists certified in Hippo therapy on staff as well. Adding those positions, she said, will add an intentional therapy program.

“Offering the mental health and ground program will open it up to people who couldn’t ride but can still even currying is a range of motion is a physical benefit,” she explained.

Dodson encourages anyone to come out and watch or, better yet, volunteer. She said volunteering can be as little as a couple of hours a week.

The bottom line is that the horses make a difference with people, Barkwill said.

“There is no part of the human being that being with a horse doesn’t change,” she said.