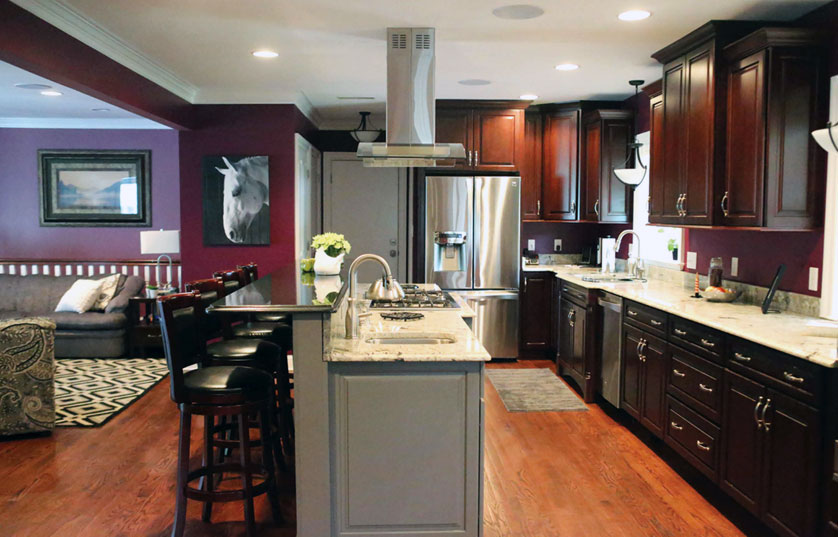 This year’s Kitchen Kapers Tour offers a fabulous feast for the eyes – five beautiful homes catering to experienced chefs or beginners looking for inspiration. Winchester’s Quota Club presents the tour. The Connoisseur Sponsor (highest level) is Golden Seal Enterprises, and Special Love – a nonprofit organization that provides cancer families a network of support – is this year’s beneficiary of a portion of the proceeds.

Food purveyors will be on hand to offer culinary treats to those in attendance; these include Westminster-Canterbury of the Shenandoah Valley, Flavor Pourfection, El Centro Mexican Restaurant and Anthony’s Pizza.

Here’s a sneak peek of what to expect. 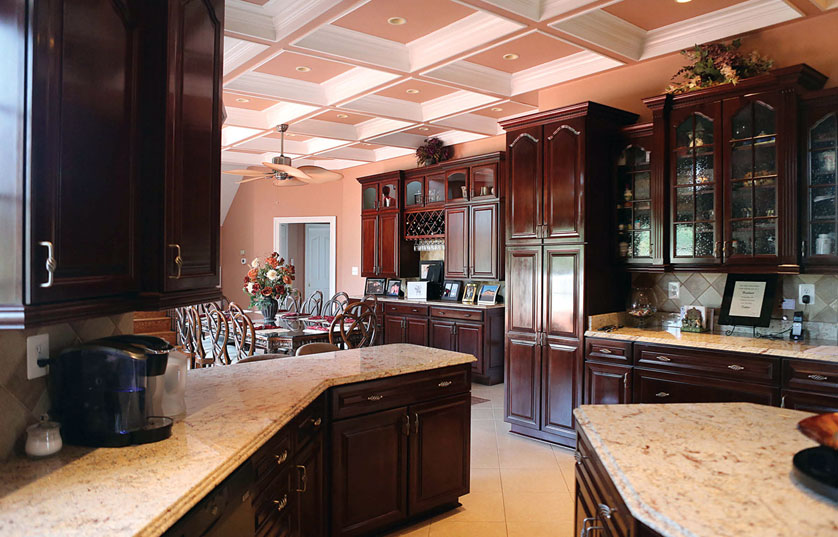 Pat Snapp moved to Hawthorne Drive in Winchester, Va., two years ago. Now retired, she and her husband previously owned and operated Snappy Lube in Winchester for 24 years. She has two daughters and seven grandchildren.

Built in 1962 and sitting on a beautifully landscaped city lot, the Snapp’s home underwent a remodel in August of 2013, finishing in January 2014. The homeowner then tackled the gardens – a landscape design that took shape with the assistance of John McAlester from Reading Landscape.

The home still has original floors, and a beautiful hutch was custom made from the original cabinetry. There are three gas fireplaces, one with unique crystals. A beautiful sun porch overlooks the gardens and features privacy screens. The basement is complete with wet bar and cabinets from American Woodmark. The master bedroom has a unique TV lift and the home is finished with doors from Carter lumber.

“I am a HGTV fan and have always enjoyed remodeling and decorating,” says Snapp. “My father built homes so I was always been involved in the construction and design of the homes he built. I guess you could say it is in my blood.”

Snapp says the house appeared to have been remodeled in the 1980s. She had walls moved to open up the floor plan. “It was a major project,” she recalls. “Many walls were taken back to the studs. We started the project in August and finished the living area in January. Most of the wiring and plumbing had to be replaced and brought to code.”

But she says it was well worth it. “It turned out just as I had it in my head.”

The original kitchen was divided into three separate areas, but during the remodel, walls were removed to make it one large area.

“It is a large galley type kitchen,” explains Snapp. “It is an open concept, which opens to the dining area and great room, including a bar area with seating for four.”

Most of the cabinets are cherry with a cabernet stain, except for an island which is painted “Grayloft.” Hardwood floors are stained red mahogany. The countertops are Spanish Delicatus granite and include gray, black, white and wine colors – complementing the cabinets. Walls are painted “Chilled Wine” and coordinating colors appear throughout the house.

The solid black bar top features a Cavaliere-Euro stainless steel and glass range hood. Appliances are Kenmore stainless steel. Cabinets have under-cabinet lighting and central vacuum below. Kraftmaid cabinetry is from MidSouth. Kenmore Elite appliances are from Sears. Delicatus granite is from A&S Marble Granite, Inc. Flooring was finished by Heisler Hardwood Floors, and construction was by HTI/Brad Treece.

“The philosophy for my design was to have a friendly kitchen where we all could gather and be together,” says Snapp. “When all the family is together there are fifteen of us, so I wanted an area that we could all be talking together and enjoying each other and not in separate areas of the house.” 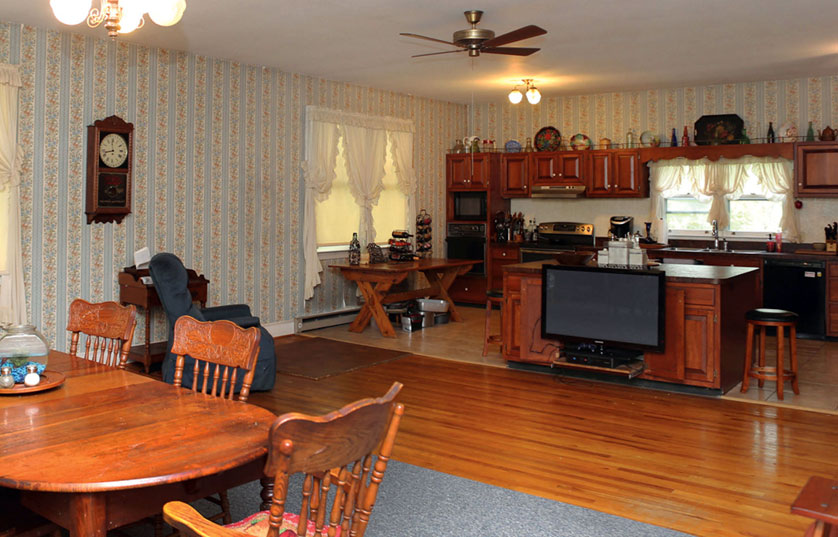 Built in 2008, it includes a nine-seat theater, game room, enormous bar for cooking and entertaining, as well as lovely outdoor spaces.

This home is complete with two master bedrooms (one with a sauna), an upstairs family room, office spaces and an additional game room.

Custom touches include paintings on walls and ceilings, chandeliers and lighted archways. 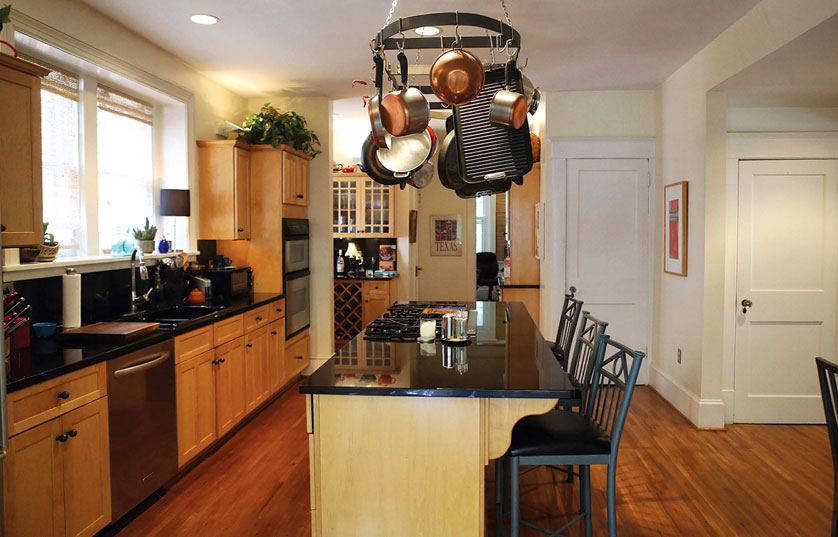 Entering Mr. and Mrs. Jerry Needles’ historic 1820 farm “Carter Hall” is like traveling back in time. Through the original iron gate, past the former slave quarters and up a wide staircase, not a lot has changed about this property except for a kitchen which was added in 1981. The home’s structure is built of three layers thick brick and still has its original wood floors.

According to homeowner Kimberly Needles (the third generation of her family to own the home), Carter Hall was built in 1820 and finished in 1830. The slate, hardware and glass all came from England. The home was constructed with 3 layers of bricks, which were made on the property. HB and Doris Alexander bought the home in 1962 from Frank Burkholder who was building I-81 through the Shenandoah Valley.

When the house was under construction, “some of the bricks were not used because they would have a hand print from the slaves when they were being made,” says Needles. “They were not thrown away. My grandmother used them to build the patios on the property.”

The basement originally had wood flooring, and the house has a total of six chimneys and 15 flues. The master bedroom downstairs was originally the library, and an upstairs bathroom was a nursery.

“My mother’s room was the master bedroom for the Carters,” says Needles. “When the Carters lived here a soldier came into the house on a horse and put his sword through the door to open it because he thought money and valuables were inside.” She explains this as the reason this particular door doesn’t look like the other closet doors in the house.

The original slave bell in the living room and the front doorbell in the home are from 1830 and still work today.

The original kitchen was located in the basement underneath the dining room. When the Kimberly Needles’ grandparents bought the home, the kitchen was in what is now the pantry. Her grandmother wanted a new kitchen. “The kitchen came to be because my grandmother always wanted a big kitchen to entertain and cook in,” says Needles. “My grandfather told her in 1980 that if she got her kitchen he would want a 2 car garage underneath. That is how the new kitchen got started. My grandparents worked on the home every summer.”

Dave Conrad built the kitchen. The cherry countertops were hand made by a company in Stephens City, Va. “The only thing in the kitchen that has been renovated is the tile floor,” says Needles. “Everything else has stayed the same.” 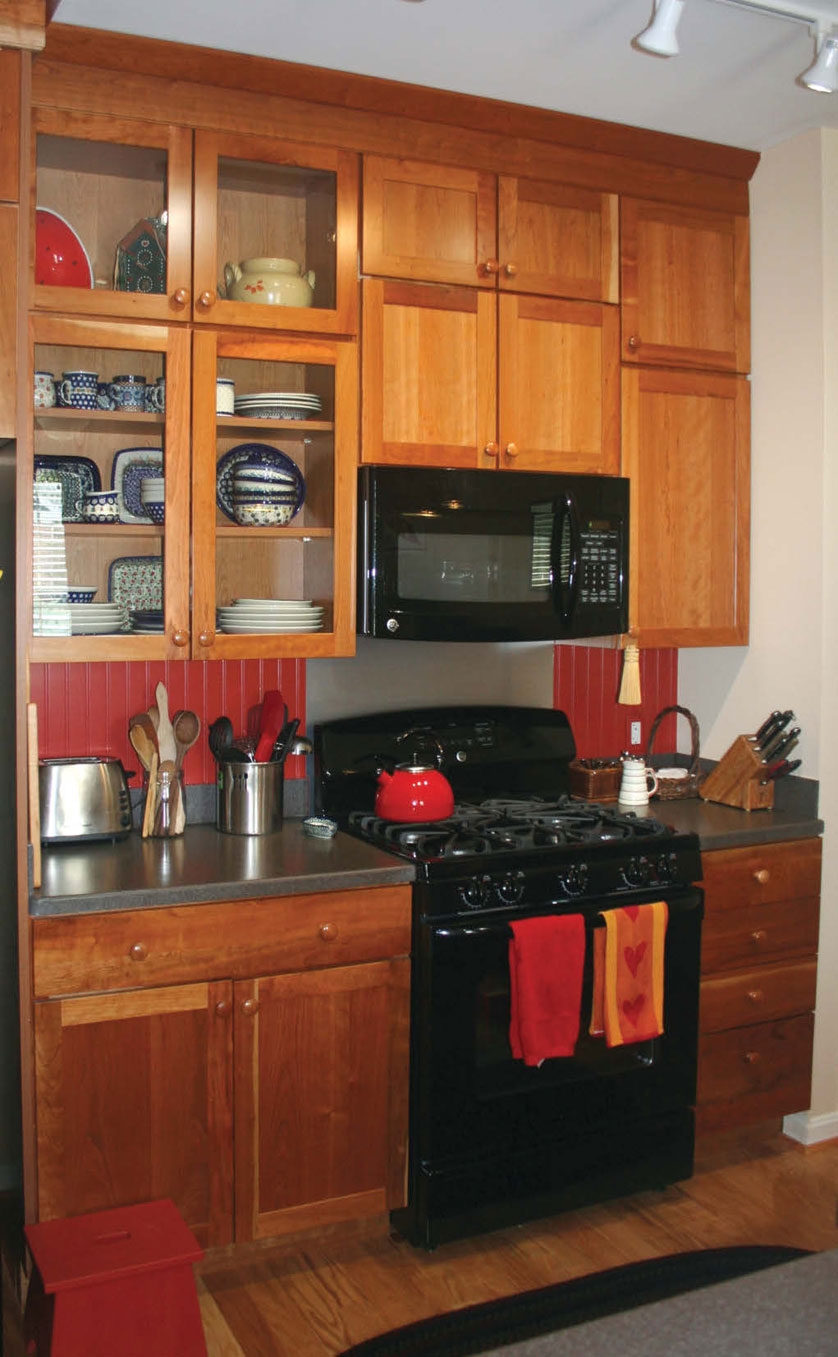 Steve Surber and Gina Sullivan have been married 33 years and are the parents to two grown boys. Their 1928 home sits on the much sought-after Stewart Street section of town, and is decorated with paintings by E.B. Smith and Mulian Menge, as well as beautiful custom-made drapes. The welcoming sunroom overlooks the back yard and features Saltillo floor tiles, handmade in Mexico.

“We gave the kitchen a major renovation when we moved in October of 1977,” says Sullivan. “Some major walls were removed and structural beams installed to open it up. The opening to what was a small screened porch was enlarged and the area was enlarged to include a family room with windows all around and skylights to add light to the kitchen. We wanted to have a room for our family to gather that was close to the kitchen. The center island was added. The downstairs staircase was moved over and the original staircase was closed off and a pantry put in.”

The kitchen features light maple cabinets, black granite counters and a black granite tile backsplash. The built-in refrigerator is Amana. The hanging pot rack was designed by the homeowner and manufactured by GL/ Dunn. The cabinets are KraftMaid from Cavalier Kitchen. The counters and backsplash are from Luckstone.

“We love the center island,” says Sullivan. “It is a gathering place for our family and friends. The children used to do their homework there and always ate their breakfasts there. When we entertain, our company always ends up around the island.”

Sally and Chuck Walters were 14 and 16 when they first caught one another’s adolescent eyes. That crush turned into love as the two attended college and then married in 1964. Chuck was drafted in 1966 and joined the Air Force in 1967. While stationed in Taiwan, they adopted a baby girl. Two years later Sally gave birth to their second daughter.

Chuck made a career of the military, and the family moved 19 times. He retired as a Colonel after 30 years of service. His love of fly-fishing led them to settle on 13 acres along the Shenandoah River. Eventually, they began to realize the trials of maintaining an older home. A friend recommended Shenandoah Valley Westminster-Canterbury (SVWC), an accredited Lifecare retirement community in Winchester. “One of the reasons we moved here is because we are guaranteed care for the rest of our lives…not ‘pay as you go,’” explains Sally.

The Walters opted for a “Potomac Duplex Cottage” which is 1,771 square feet. Besides the kitchen, they have two bedrooms, two full baths, living room, a dining area and a sunroom. Both are Master Gardeners, and they have plenty of space to plant on the mature grounds surrounding their home. Chuck and Sally also love to cook, so they replicated the kitchen they’d had in their home along the Shenandoah River. They extended the natural red oak cabinets to the ceiling and added glass fronts on a few cabinet doors. The black appliances blend well with the gray Corian countertops, red bead board, and aluminum backsplash. Glass pendant lights hang above the counter with the sink.

Custom window treatments in a colorful paisley print, pick up the red from the pie safe. The same fabric was used to cover the seat cushions of the kitchen chairs. Antique artifacts are displayed on walls, and there is a story behind most of them. The best example is the wooden rolling pin that was hand carved by Chuck’s Grandfather Walters, for his bride.

When the couple is not cooking or gardening, you’ll find them swimming in SVWC’s indoor pool (with some of their eight grandkids) or working out in the fitness center. The two travel the country in an Airstream, both for pleasure and volunteer opportunities. Sally and Chuck share a life of exciting travel and service, in a welcoming community with the confidence of future care, as their love story continues at SVWC.