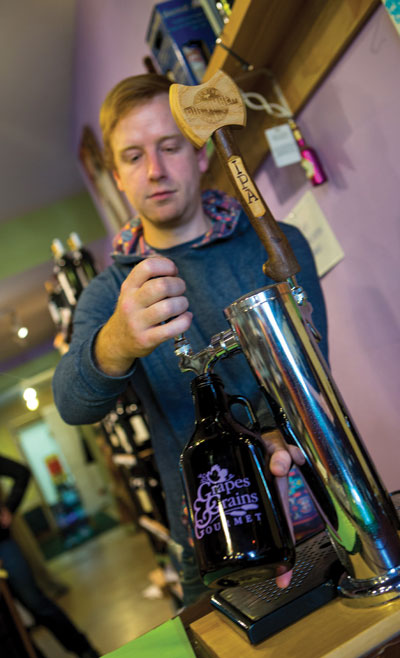 When Cheryl Gallery opened Grapes & Grains Gourmet in 2006, there was nothing to indicate that the modest little wine store would someday become one of the most popular shops in Shepherdstown.

With the encouragement of her daughter, Liz, Gallery had decided to embark on her own business venture. But, on that March day in 2006, she had just 12 different labels of wine in the store, and she wasn’t feeling particularly optimistic. All of that soon changed.

The day I opened it, I could cry,” Gallery recalled recently. “I just didn’t have the capital to fi ll the shelves. But the community came and really supported me.”

Now, more than a decade later, Grapes & Grains Gourmet is fl ourishing at its 110 E. German St. location, with a staff comprised of Jeremy Horner, Jeremy Cook and Paul Young. Gallery now offers approximately 1,200 different labels of wines, along with hundreds of beers – including more than 300 labels just on the store’s singles shelves. “Mix packs,” comprised of up to six different beers in a six-pack, have become one of the most popular features at Grapes & Grains. And, beginning this year, beer enthusiasts can now purchase growlers from the store.

And then there’s the food offerings that put the “gourmet” in Grapes & Grains Gourmet. Gallery offers cheeses, crackers, chocolates and smoked salmon, to name just a few items. She also carries West Virginia syrup from the Indian Water Maple Company, as well as meats from Farmer’s Daughter in Capon Bridge.

“It educates people,” she said. “You wouldn’t buy one of the bottles, but once you taste it, it changes your mind.”

On Christmas Eve, which falls on a Saturday this year, Gallery is thinking about moving the wine tasting to Friday to accommodate shoppers on what promises to be a busy weekend. The holiday season, she said, is typically much busier than the rest of the year.

Gallery has a policy about the wines she carries: They don’t go onto her shelves unless she tastes them fi rst. She estimates she has met nearly 85 percent of the winemakers.

“When I look at a bottle, I see the person that made it,” she said. “It’s a fun, fun thing, and we don’t bring it in unless we taste it.”

Gallery said she tries to stay away from corporate wines, preferring the smaller labels. As for regional wines, she features one shelf of West Virginia wines and one shelf of Virginia wines. From Maryland, she currently carries just one label, Big Cork Vineyards of Rohrersville.

Grapes & Grains also carries a large selection of international wines, including some from Italy, New Zealand, Hungary, Austria, Chile and South Africa, among others.

Gallery said the cost of her wines compares favorably with other stores in the area. She tries to be fair with prices, and she offers a rewards program in which customers who spend $300 over time will receive 10 percent off their purchases. They get another 10 percent with the next $300 spent, and so on. The store keeps purchase records so a customer doesn’t have to keep track of how much they’ve spent.

With value in mind, Gallery reserved a corner of her store for a bargain bin, featuring wines priced at $9.99 and under. It includes such unexpected fi nds as a Pinot Noir for $8.99 and a Merlot for $5.99.

Even on these wines, though, Gallery refuses to sacrifi ce quality. She says the bargain wines compare favorably with other, far pricier wines. “It’s got to be good to go in that bargain bin,” she said. “We have standards, even for the cheap wines.”

A native of Baltimore, Gallery moved to Shepherdstown in 2004 with her husband, Martin, a longtime ranger with the National Park Service. Martin Gallery worked at the C&O Canal National Historical Park for 36 years before retiring at the end of 2014 as the Park Service’s oldest and longestserving law enforcement ranger.

When their son, David, died in 2015, Cheryl and Martin experienced fi rsthand just what a tightly knit community Shepherdstown can be. “The people of this town held me up,” Cheryl said. “They’re great people.”

Though Shepherdstown is both a college town and a tourist town, Gallery said she doesn’t see too many students in her store. Rather, it’s the townspeople and the tourists who visit the shop and keep coming back.

During the winter, when business has otherwise slowed to a crawl, Gallery can usually count on guests from the nearby Bavarian Inn stopping into the store while they casually wander the downtown streets.

As the business enters its second decade, Gallery is amazed by how far it’s come.