Knitting and crocheting may seem like dying arts, but Yarnability, a new business in Charles Town, WV, is taking advantage of renewed interest in these hobbies, as well as teaching these skills to another generation.

During summers in upstate New York when she was about ten years old, Karen Frail, Yarnability’s owner, was taught how to crochet by her aunt. However, her career didn’t include crocheting or knitting initially. She received bachelors and master’s degrees in speech therapy. 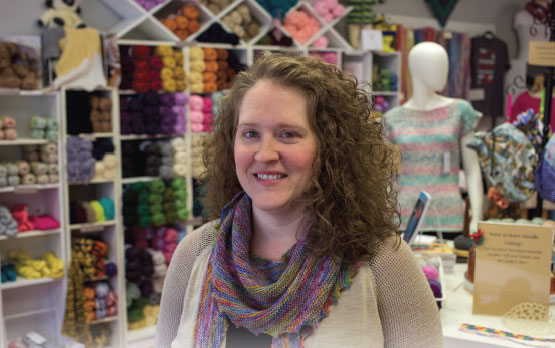 “But I always had a focus on the arts, like music and theater in high school and college,” Frail says. “In the early 2000s, knitting became popular again. It became hip to make your own things.”

Frail began working at Yarnability in Shepherdstown, WV, in 2012. At the time, the shop was owned by Susan Wolcott, the former owner of Y2Knit in Funkstown, Md. from 2003 to 2012.

Yarnability was located in Shepherdstown for two years on Duke Street then relocated to Princess Street where it remained from 2014 to 2017.

“I began to expand my skills since I was surrounded by yarn,” Frail says. “When Susan wanted to retire, she had hopes of continuing the community of knitters and crocheters that Yarnability had helped in creating, so she sold the store to me.”

Frail decided to move the store to 130 W. Washington St., Charles Town in March of this year.

“I decided to make the move to Charles Town because the area is really pushing the arts with its promotion of an art and cultural district in town, and I wanted to be in it,” Frail said. “It’s also a central location for customers in surrounding areas like Leesburg and Winchester, Va. and Frederick, Md. I felt Charles Town also needed a local yarn shop.

“Yarnability is an 850 square foot space, which carries a wide variety of superior yarn, quality tools and classes for the beginner and advanced learners in knitting and crochet. Frail says that Susan Wolcott still teaches classes part-time.”She had quite a following of customers from the Funkstown and Shepherdstown stores,” Frail says.

Private lessons are also available at $20 for 90 minutes of instruction. Frail says she offers weekly learn to knit and learn to crochet classes in group settings at $20 for a two-hour session. “We provide project-guided classes, as well as instruction for customer chosen patterns and projects. We invite people to come in with projects they want help with,” she says.

She offered a six-week class for the summer and plans to start another one in the fall. The summer class ran from May 17 to June 25. Those in the class could choose from three patterns: Sirdar Yarns released a new pattern for the summer using their newest double knit weight cotton yarn called Toscana. These skeins have 232 yards each.

This top is knit bottom up with seaming. The top neckline offers lace and small cables for an easy knit challenge. The yarn boasts beautiful color melting effects when knit. The pattern is available in the store.

The Cullum, by Isabell Kraemer is a breezy top knit top down seamlessly with delicate lace detail at the neckline and hem. It can be made from 100 percent Egyptian cotton from Universal Yarns. For crocheters, there is the Summer Crochet Cardigan.

“Clothes made from linen, cotton and silk yarns can be worn in the summer. These materials breathe and are cool,” Frail said.

On her website at yarnability.com Frail recommends a yarn inspired by spring “that makes me think of flowers.” Bamboo Bloom from Universal Yarns is a blend of wool, bamboo, and a touch of acrylic. It offers a very attractive thick and thin texture that is most pleasing to the eye and comes in a variety of colors. Frail boasts this is a great yarn for beginner knitters who want to start their gift giving projects early.

Frail works with other local business people and other yarn specialists to bring in new projects for the store. With the opening of the Charles Town Farmer’s Market, Saturdays in April and May, Frail offered classes after the market closed on how to knit On the Spice Market, a shawl designed by Melanie Berg. The shawl is described as the perfect warm wrap for the chilly early mornings at the market, but it’s light enough to keep wearing as the sun warms up the day.

Also in April, Yarnability held its first trunk show with Cutthroat Yarn at its new location. A trunk show is a special event within the fashion world in which an artist or designer puts on a special display of his or her work for review by a select group. The name comes from the fact that a designer or sales rep will literally show up with a trunk of merchandise to show off. Previously a local yarn store located in Leesburg, Va, A Cutthroat Yarn is owned by Jeanette Ward. She began dying her in-house yarn for the shop and it quickly became its number one seller. The drive for the hand- dyed yarns escalated so that Ward closed her storefront doors March 1 and is now focusing on bringing more lovely hand-dyed creations while traveling all over the United States with her yarn.

On Mother’s Day this year, Yarnability became one of the registered local yarn shops across the country to become part of the Knitted Knockers charitable group that provides breast cancer survivors with soft, comfortable, knitted prosthetics.

Also in May, Yarnability had Friday night classes to teach people how to knit socks for their working feet.

Frail also wants to teach people about fiber art, fine art whose material consists of natural and synthetic fiber. Frail is the treasurer for the Shenandoah Valley Fiber Festival held September 23 and 24 at Clarke County Ruritan Fair Grounds in Berryville, Va. The festival celebrates the many aspects of fiber. Vendors offer various raw and finished fibers, as well bring the animals many of these fibers come from like goats, sheep and alpacas. Other products available include buttons, spinning and weaving equipment, rugs and purses, classes and food and drink.

As a new and first-time business owner, Frail says she is still working out future plans for the store. She continues to work part-time as a speech therapist. A different kind of therapy takes place in the store itself.

“It’s a social gathering. Often referred to as bitch and stitch, these social gatherings can be their own type of therapy,” Frail says, laughing. “We want our customers to succeed and be comfortable. The work doesn’t have to be perfect. It can build self-confidence. You’re working with math, art and design.”