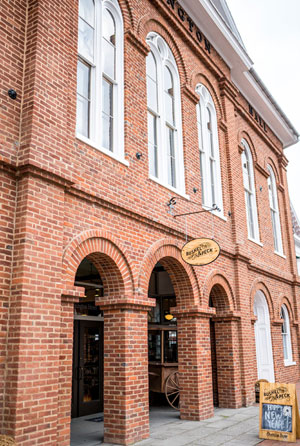 Bushel and Peck, a new, farmer-focused supermarket in Charles Town, WV, makes it easier to know where your food comes from while continuing to enjoy fresh items all year long. Just like the organic craze, this is legitimately a “thing” now, and with the influx of documentaries lamenting the unsavory practices that can occur with the production of produce, grains, meat, and dairy items before they reach our dinner plates, a supermarket of this caliber is a welcomed sight. What makes Bushel and Peck’s charter all the more refreshing is that the owners only stock items from local farmers and distributors. This dedication to the prosperity of the people in the area impacts the local economy in a big way. Stocking food from farmers that practice ethical methods allows health-conscious shoppers to believe in the quality of their food again. It’s a win-win in every sense of the term.

There’s something to be said about being able to ask from which farm food items were sourced and get a location that is no more than 60 miles away. It harkens to times past, when the milkman delivered fresh pints twice a week. For Todd Coyle, a member of the Jefferson Gap Coalition, which oversees Bushel and Peck, it’s a dream come true.

It all started with a farmers market – the Charles Town Farmer’s Market, to be exact. This community staple, which boasts up to 45 vendors every season, services the community with very much the same principles that Bushel and Peck does. The farmers and artisans who participate are local to the area and believe in providing the customers that attended the event with natural products that were cultivated organically. The problem is that when the weather breaks and the outdoor activity season is over, access to so many local vendors in one place is gone. This not only impacts the people who enjoy the products they can find in the grassroots setting that they were unable to find in their supermarket, but also the farmers that participate, from both an economic and distribution perspective. Bushel and Peck changes that. Now people will have access to fresh, locally grown foods from accessible farmers year-round, not just from April to October. Subsequently, these farmers will be able to service the community throughout the year and remain solvent through the winter months, positively impacting their personal financial position and the local economy.

Todd Coyle and Fiona Harrison were on the board that supports the farmers market. The time dedicated to the effort helped them to understand what it took to create a successful regional open-air market that is widely known in the tri-state area. Wanting to take the project further, they worked with a group of agricultural producers and crafters. The Jefferson Gap Coalition, the parent non-profit organization that covers both the Bushel and Peck supermarket and the open-air farmers market, was born of these affiliations in 2016. The Jefferson Gap Coalition is an inclusive collective of growers, artisans, and producers, as well as local business people, and other interested parties, each with a finger on the pulse of the community and how it can be impacted by their specialties.

They are active in the community, participating in tree plantings and community beautification efforts, parks and recreational facility activities, and festival planning. With the forward-motion of the project in mind, the Jefferson Gap Coalition jumped at the opportunity when Charles Town city officials decided to renovate the Charles Washington Hall building at 100 W. Washington Street, and approached them about housing a market inside. This effort effectively restores the building to its original function. In the 1800s, the building served as a Charles Town marketplace. So committed to this effort was the city council, that they assisted the effort by installing cooling units into the facility.

For Todd Coyle, this return to the way that food was made available decades ago is a long time coming. His father was a farmer in Jefferson County, West Virginia, so he grew up in a community full of people who grew food in their backyards and raised their own cattle. When he struck out on his own, he noticed the difference in the taste between the food taken directly from the farm that he was used to when growing up, and that which was available in the grocery stores. This revelation is not his alone. It’s a nod toward the sustainable living movement that has been making marked strides in urban settings across the country. What people have come to discover, and what the Jefferson Gap Coalition’s research brought to bear, is that people really do care what is put into their foods in the form of pesticides and preservatives: people actually are interested in how their food is cultivated and where it comes from.

“A supermarket like Bushel and Peck gives people a confidence in their food,” says Coyle.

Fresh food is gathered from sources that are no more than 60 miles away and within the tri-state area. Canned goods are brought in by a local distributor. For example, the meat that is found in the store is procured from Jefferson County. The produce is within 30 miles of Bushel and Peck’s location in Charles Town. This type of access to customers changes the reality for farmers in the region. Where some only had the ability to grow during the months that the farmers market was open and make due for the rest of the year, having an outlet like Bushel and Peck available promotes greenhouse construction and usage to make products available all year. Farmers are not the only ones to benefit from the opening of this groundbreaking supermarket. Artisans are able to sell their products in the market as well, creating a viable stream of income for crafters and creators in the area. Shoppers are likely to find ceramics, candles, soaps, cosmetics, and personal items on Bushel and Peck’s shelves at any given time.

An amazing coincidence (or is it kismet?) is that, given Todd Coyle’s family history and that of the Charles Washington Hall building, Bushel and Peck stands in the same place where his ancestors likely sold their wares.

“It feels like I’m going back to my roots,” Coyle quips.

Indeed, it appears that way.

Farmers markets make the farmer more accessible. Shoppers have the chance to meet the person that cultivated the very food they will consume, ask questions about the process, and learn a little bit about the industry. Bushel and Peck popularity of agritourism, those involved with Bushel and Peck will offer customers unique opportunities to visit farms and meet the people behind the food. They will also provide tips on growing items of their own. The chance to educate customers on the possibilities that exist with growing their own food makes shopping at Bushel and Peck a very personal experience.

The Jefferson Gap Coalition will continue to run the farmers market during its normal season. Bushel and Peck will be closed during farmers market hours so that attendees can enjoy the cultural experience that represents this popular event. You can visit Bushel and Peck Tuesdays through Sundays from 10 p.m. to 6 p.m. otherwise. The store is located in Charles Town at 100 West Washington Street.