Quality Is the Key to Delicious Dishes

Home » Articles » Quality Is the Key to Delicious Dishes 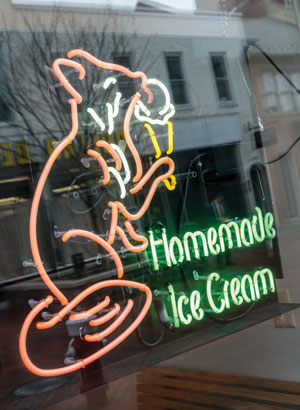 First-time visitors to the Red Fox Creamery might have a difficult time believing the popular ice cream parlor has only been in Old Town Winchester for a little more than seven years.

Since opening her doors in December 2010, owner Kathy Puffinburger has seen her business quickly grow into one of the most popular destinations in town, developing a loyal following typically associated with establishments that have been here for decades.

And, for those in the mood for something that’s sweet but not necessarily cold, Red Fox Creamery offers home-baked brownies, cookies, cakes and pies.

Puffinburger is flexible when it comes to her customers’ requests.

During the winter months when foot traffic on the downtown walking mall is often scarce, Red Fox might see 40 or 50 customers per day. During the warmer months, though, it’s a different story.

“In the summer, if we get fewer than 200 people in a day, I’m shocked,” Puffinburger says.

Nearly 15 years ago, Puffinburger was an accountant before deciding to go into business for herself. Though she lived in Winchester at the time, she had passed through the Loudoun County town of Middleburg several times and thought it would be a good place to set up shop. She started out selling Virginia-themed items. She soon began offering Hershey’s ice cream before shifting her focus to a homemade product.

Despite its small size, Middleburg boasts a thriving business community. When she was there, Puffinburger said, there were 16 different places where someone could grab lunch.

It was expensive, too. She was paying $3,100 a month in rent, which contributed to her decision to close up shop in 2008 and open a production facility on Cameron Street in Winchester. Now, she was paying just $500 a month in rent. She and her son and business partner, Brian Lewis, were bringing an ice cream trailer to numerous fairs and festivals throughout the area.

Still, Puffinburger missed having a store where she could interact with her customers on a daily basis, so she opened Red Fox Creamery at 130 N. Loudoun St. in December 2010.

It didn’t take more than a couple of months, she says, for the legal community and other downtown professionals to start showing up on a regular basis. In April 2012, she moved a few doors down the walking mall to her current location at 146 N. Loudoun St. The store now offers 16 flavors of ice cream, seating up to 45 customers at one time.

Red Fox Creamery is always a popular destination, and even more so during events like the annual Apple Blossom Festival and on July 3, the traditional date for Winchester’s Independence Day celebration.

On that day, says Puffinburger, the line for ice cream often extends out the door and a couple doors down along the walking mall.

To keep up with demand during those busy times, Red Fox Creamery adds several part-time employees during the spring and summer. During Apple Blossom weekend, for example, Puffinburger usually has eight people working at once, preparing sandwiches, serving ice cream, making milkshakes, and doing whatever else is needed.

While she usually gets by with two employees – one full-time and one part-time – during the winter, Puffinburger has at least four people working at all times during the warmer months. Many of them are teenagers and college students who have returned to work for her year after year.

Puffinburger and her son – who does much of the cooking, serves as maintenance man when needed and even helps deliver lunches – also get occasional help from family members, including her grandchildren.

While the everyday operation of Red Fox Creamery keeps Puffinburger and Lewis busy, they still find time to do some catering, providing food, ice cream and baked treats for graduation parties, birthday parties and other private events. In addition, they bring their ice cream trailer to the Frederick County Fair each summer as well as the Waterford Fair, a popular event in Loudoun County, which annually draws thousands of people.

Puffinburger is a firm believer in giving back to the community that has supported Red Fox Creamery from the beginning. According to its website, redfoxcreamery.com, the business has donated food, time and gift certificates to both the Winchester and Frederick County school systems, as well as Habitat for Humanity, Sky Meadow State Park, Evan’s Home for Children, the James Wood Band Boosters, St. Jude’s Children’s Research Hospital and a number of local churches.

That sense of community manifests itself in Puffinburger’s approach to running a small business. says that although every business in Old Town Winchester is independently owned, the merchants are united in their support of each other.

“If someone needs change or a head of lettuce, we help each other out,” Puffinburger says.

Puffinburger doesn’t do any of her personal shopping at malls or in big box retail stores, preferring to support her fellow small business owners. Nor does she eat at corporate restaurants. And, she said, most of her Old Town colleagues share her philosophy.

“I’m a small-town person,” she says. “(Chain stores) take away from little people like me.”

Quality is of the utmost importance to Puffinburger, who uses fresh local fruits and gets her milk and creams from Trickling Springs Creamery, located just south of Chambersburg, Pa.

She is extremely particular about her ingredients and doesn’t use colorings or other artificial ingredients.

“We make our ice cream as natural as you can get it,” she says.

Of course, quality doesn’t come cheaply. Ice cream at Red Fox Creamery might cost a little more than it does at some other shops in and around Winchester, but there’s a good reason for that.

For starters, Puffinburger spends $16 a gallon for the milk she uses in her products. And the cost of vanilla has soared within the past two years.She says it’s now around $249 per gallon.

The key ingredient in Red Fox’s ice cream is butterfat, which, according to Puffinburger, gives the product its taste. Her ice cream contains 16 percent butterfat. To her knowledge, she says, no name brand ice creams contain that much. The soft serve flavors that are popular at many ice cream stands typically contain about 10 percent butterfat.

Puffinburger says she has been thinking of turning the business over to her son within the next two years. When that transition occurs, she is confident he will continue to build on her commitment to quality.

“He knows the things that are important to me,” Puffinburger says. “My mission is to make it as good as something I would eat.”

During the summer, Red Fox Creamery is open until 9 p.m. Monday through Wednesday and until 10 p.m. Thursday through Saturday. Occasionally it will stay open later for special events.For more information, call 540-545-8630.