Michael Rosario opened Mikey’s Mini Donuts eight months ago in Hagerstown, where he lives with his wife and 1-year-old child. “It’s a family-owned business,” he said. His wife helps him out, when she’s not working at her job, and his cousin is a business partner. His doughnuts appeal to children and adults alike. 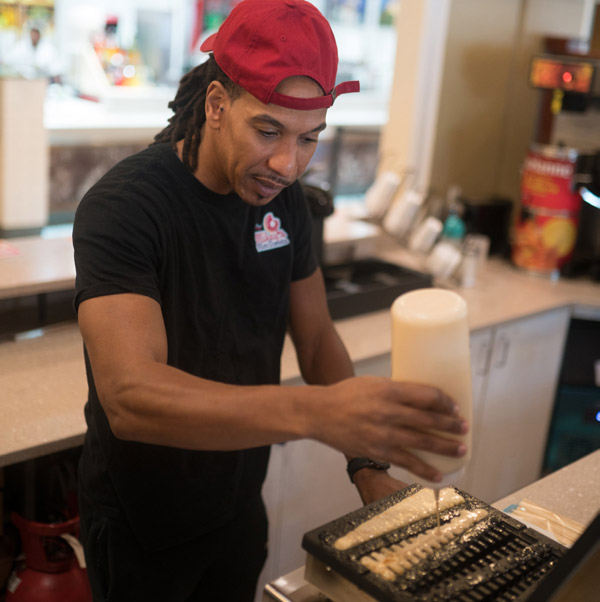 A clear container of tiny, colorful marshmallows sits on a counter waiting to be added to the doughnuts. Other jars contain chopped nuts, Fruity Pebbles and chocolate chips. Syrup containers sit ready to squiggle their contents onto the doughnut treats. A Kitchen Aid sits ready to mix up the dough for the doughnuts.

“I make the doughnuts fresh from scratch,” Rosario said. “I make one or two pounds of dough at a time.” The dough is then shaped into the doughnuts and slipped into the fryer. Rosario churns out five orders per batch of dough, and mixes new batches repeatedly to keep up with demand. The tiny doughnuts have even smaller holes, and are similar to doughnut holes, except each one is actually a tiny doughnut.

“Kids like to watch me make them,” Rosario said.

Besides doughnuts, Rosario offers Waffle Pops, which are strips of Belgian waffle dough on a kebab stick. He also makes these fresh to order. Waffle Pops come with toppings, just like the doughnuts.

The whole process of frying dough into a Mini Donut or Waffle Pop takes about two minutes, complete with toppings. Mini Donuts come in bags of eight or 12. Or you can order The Mikey, four Mini Donuts and a scoop of ice cream.

Rosario, 34, is a native of Puerto Rico. He and his wife have lived in Hagerstown for about eight years. Rosario has worked as a bank teller, in a warehouse and as a dishwasher, but, he said, “I never found my niche.”  He added, “I’ve always daydreamed about being a business owner.” Rosario learned about the mini doughnut business, and he decided that was a way he could become his own boss. He did his research, and found that there are no other local shops that focus on selling fresh, homemade mini doughnuts.

“It’s paying the bills right now,” he said. “I’m working on the branding.” Rosario does not have a background in cooking, but he learned the skill by watching and listening.

“I’m one of those people, if I see someone doing it, I can learn it,” he said. He has had difficulties, including broken machinery, which he had to fix in a hurry. “I kept on going,” he said. “I’m learning as I go. I make mistakes and I learn from them.”

Rosario’s background as a bank teller has helped him to provide topnotch customer service. His cousin and business partner, Richard Gonzalez, is providing the business with his sales and marketing expertise. “Our plan is to expand the business to franchises,” Rosario said.

Mikey’s Mini Donuts is located at the entrance to the Premium Outlets food court from the parking lot. Mikey’s is the first stand you see when you walk into the dining area. It also faces onto the food court’s corridor of eateries. Along with Mini Donuts and Waffle Pops, he sells coffee, cappuccino, sweet Southern-style iced tea, soda and bags of potato chips. He plans to add bagels to his menu, although he plans to keep his business focused on the Mini Donuts.

Rosario hopes to be in a position to give back to Hagerstown someday. He likes living in his adopted community, and he hopes to see the community and its downtown thrive. “We need entrepreneurs in Hagerstown,” he said. “I really want to do something positive for this community.”