Shenandoah Fine Chocolates has its own deliciously storied past as a time-tested chocolate shop with former adjoining restaurant. But new owner, Stacy Macomber, is looking to the future to craft success for herself and the business.

“When you buy a chocolate shop, you don’t know a lot about it except you like to eat it,” she said.

In her case, that might only be half true, since Macomber, 47, brings a long history of working in food service, and her manager, Emily Neff, 44, has years of experience running a catering business in South Carolina. She also used to make espresso drinks at the former Creekside Daily Grind.

“We are chocolatiers, not chocolate makers,” said Macomber. 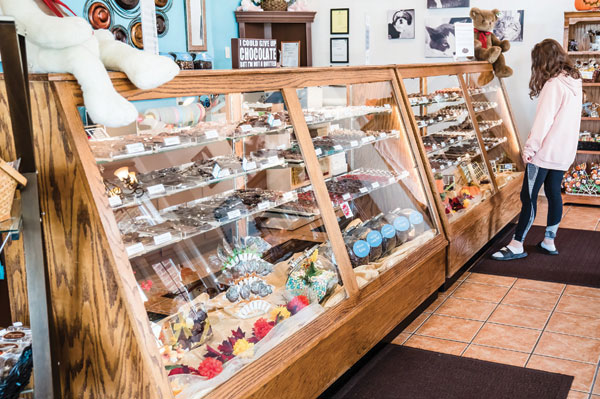 Neff and Macomber don’t go as far as making the cocoa beans into chocolate, she said. But they do craft fully formed chocolate into a stellar work of art.

And in so doing, they’re maintaining Shenandoah Fine Chocolate’s quality and history.

Macomber purchased Shenandoah Fine Chocolates of Winchester in 2016. The store, which opened in 2001, had since expanded to include the full-service Chocolate Café, offering sandwiches, salads, coffee, and a wide selection of mouth-watering desserts, but then dropped the restaurant before Macomber took over. Still, in spite of its successes and losses, Shenandoah Fine Chocolates never lost the gourmet chocolate so important to the core of the business.

Now it’s changed again, to focus on the chocolate shop and an adjoining coffee café.

Macomber grew up in Charleston, W.Va., but spent a lot of time in Winchester before returning here after eight years in Roanoke.

Once buying her business, she hired on Neff, who hails from Winchester, but studied dance before moving to South Carolina. There, which pursuing a career in dance, she started a catering business, before eventually returning to Winchester and joining Macomber at Shenandoah Fine Chocolates.

“We found each other through a mutual friend,” Macomber said.

Shenandoah Fine Chocolate has long offered catering services for events like weddings and bridal showers, and Macomber said it still does.

“We can cater pretty much everything,” she said.

Barks, like chocolate bark and peppermint bark, were always a popular offering at the shop, but now Macomber’s adding flavors like cinnamon pretzel bark, Oreo cookie bark, and cayenne bark with spiced peanuts.

Dark chocolate is available in large quantities and varieties for the healthier chocolate nuts of their clientele, and, indeed, their menu caters “to those who love to splurge.”

They still sell top sellers like buttercreams, truffles, turtles and caramels. And molded candies—which come in thousands of molds such as apples and pops—are a favorite for any day or occasion.

“Barks and molds are my favorites,” Macomber said.

“I go through the store looking for things to dip,” Macomber said.

“That’s the fun part of the chocolate, being able to say, ‘OK, does this work or does it not work?’”

More often than not, she finds it works.

One such untraditional flavor that turned out to be a hit is chocolate-covered bacon.

“People love our bacon bites and bacon strips,” she said. “It goes like gang-busters.”

Another big seller is the chocolate fudge, though Macomber hopes to add peanut-butter fudge and maple nut fudge this season, as well as chocolate-covered ginger snaps.

Though chocolate is their specialty, they also offer non-chocolate items for those with allergies or preferences for other foods.

Their German hard herbal candies are popular, as are their jelly beans.

On a recent afternoon, a client ordered two large buckets of gummies to bring his pregnant wife.

Macomber said she has a lot of repeat customers like him, and that makes the business feel more personal.

“We will pretty much cater to everyone,” Macomber said.

In addition to candy, brown-sugar pecans are available by the pound, and a roasted nut line will be introduced in time for the holidays.

Coming off a typically slow summer for chocolate buyers, Macomber said she’s ramping up for the busiest time of year, which starts with Halloween “and just builds, builds, builds till Christmas.”

Adding to the flavor of fall are the drinks and goodies at the coffee café, which Neff runs.

The café offers standard coffee shop drinks such as lattes, cappuccinos, and specialty drinks like the Black Forest, with chocolate and cherry, or mochas, with what else but chocolate?

And it isn’t just any chocolate from a box or a canister.

Macomber agreed: “You’re not going to find our hot chocolate anywhere else.”

But that doesn’t mean they’re done mixing up some alterations.

“I would like to experiment more with hot chocolate,” Macomber said.

Chocolate is popular any time of year, but Macomber likes to dress up her chocolate creations for the season or relevant holiday, such as using red, white, and blue coloring near Independence Day, or adding a chocolate witch to the menu at Halloween.

On warmer days, the store sends customers away with ice packs to keep their chocolate safe in the heat. And they also sell gift items to help customers complete a gift with a fun, heartfelt item that will last longer than the average box of gourmet chocolates.

The shop invites visitors to pull up a seat and sip a coffee or chat over a slice of Neff’s Shenandoah Chocolate Cake, while enjoying the sweet scent of buttercream and ganache that wafts through the room.

“My three favorite things are in this building,” Macomber said. “Food, chocolate, and animals.”

And, in fact, customers might not notice right away that the walls are decked out with photos of cute, cuddly rescue animals.

This is both for decoration and for education, Macomber said.

The animals pictured have already been rescued, some by Macomber and Neff. And one picture shows Charlie, a therapy dog who helps in crisis situations.

“We were trying to lighten the space a little bit,” Macomber said. “Since we started, we’re well over [raising] $4 thousand.”

“We’re very blessed,” she said. “Business has been good.”

Shenandoah Fine Chocolates is located at 3111 Valley Ave., Suite 110. Their hours are 10 a.m. to 5 p.m., Monday through Saturday. For more information, call 540-535-0010 or visit https://shenandoahfinechocolates.com. Find them on Facebook by searching The Chocolate Café.