When it comes to wild birds, Bruce and Dolores Johnson have pretty much heard it all.

After 12 ½ years in business, they might be considered experts in their field. And yet, every day, their customers have the chance to surprise the couple with news of something new and exciting flocking this way.

“It’s not unusual to hear, ‘Guess what I got in my backyard,’” Bruce said on a recent afternoon, as hummingbirds from Canada were traveling the Shenandoah Valley on their annual migration south toward Florida and, eventually, over the Gulf of Mexico to Central America.

“Right now, we’re getting swamped with hummingbirds,” he said. 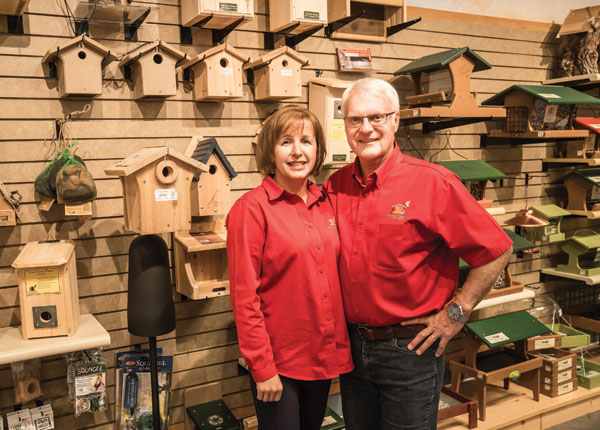 Another popular traveler to these parts is the bluebird, a cavity nester that Valley residents can easily attract with the right housing and food.

And as the number of houses increases around the Valley through more development, the number of cavity nesters will also increase. Those who want to attract cavity nesters, such as tree swallows, should have success by setting up birdhouses in their yard.

But fall and spring aren’t the only migration schedules to watch for, the Johnsons said.

“One of the best places to see a snowy owl in the winter is the Outer Banks [in North Carolina],” Bruce said.

Snowy owls, which hail from Canada, have, in recent years, been spotted all along the U.S. East Coast in states like New Jersey, Maryland and even South Carolina starting in early December. Though their nesting preferences historically kept them in the Arctic tundra areas of northern Alaska and Canada, snowy owls also seek coastal areas resembling tundra. In recent years, they’ve been hypothesized to head farther south in search of food or because of environmental or climate changes.

But while the oddity of a snowy owl in temperate zones has become more common, the Johnsons, who own a Wild Birds Unlimited store in Winchester, say they still learn things in their line of work that surprise them.

For example, the rufous hummingbird from southern Alaska and British Columbia, which would typically migrate down the West Coast, has been known to fly east and turn up here in December over the last several years.

And it’s these sorts of surprises that can cause customers to flock over the Wild Birds Unlimited at 3103 Valley Ave. to share their stories with the Johnsons, who are just as eager to hear something new and fascinating in the world of wild birds.

Customers all tend to have the same thing in mind, the Johnsons said. They all share a love of nature, and they love to talk about it.

“They all want serenity in their back yard,” Bruce said. And most of them want to share that serenity through discussions at the store. “It’s fun, enjoyable; we get to meet a lot of customers.”

“We bring people and nature together,” she said. “That’s our goal.”

The Johnsons are local store owners in the national Wild Birds Unlimited franchise. They purchased their business 12 ½ years ago on May 1, 2006, but they’ve long shared a joy for the outdoors.

Dolores is French Canadian, and Bruce is from the Winchester area, but they were in Virginia Beach when Bruce said he “fell in love” with the Wild Birds store there, and they decided to look into opening a store of their own.

Both were teachers—she an elementary school teacher and he a teacher of agriculture, natural resources, and environmental science.

She ran the store at first, and in 2010, after he retired from teaching, he joined her.

There are 12 Wild Bird Unlimited stores in Virginia, and one in Morgantown, W.Va., but the Johnsons’ store remains the only one in the Winchester area. The next closest is in Ashburn. Other nearby stores are in Arlington, Charlottesville, Fredericksburg, and Frederick, Md.

“I think it was a great fit,” Dolores said of the store. “I also had a passion for birds.”

The franchise has more than 300 stores around the U.S. and Canada, the company reports at its website, www.wbu.com.

“Birds love us & our customers do too,” the website says.

But while the company sets the model for its franchise, each store is individually owned, which Dolores said allows the couple the freedom to buy what they like for the store.

Bruce said that was a big question the couple asked themselves when deciding to go into business for themselves.

“How are we going to run this store?” he remembered asking himself. And asking those big questions before taking on a business has been invaluable to helping them serve their community, he explained. “We think that we have excellent customer support.”

Their location in Creekside Station south of Winchester also plays to their benefit, allowing commuter traffic to easily access the store during the workweek, and travelers up and down Route 11 between Winchester and other nearby tourist areas to find them on weekends.

One of their biggest draws is the education they provide, both through their service at the store and through their community outreach. They’ve given presentations to area garden clubs and also appeared at garden shows.

But they said their store, with its unique collection of merchandise, is also a huge part of their success.

“We have a lot of gifts, mostly nature oriented,” Dolores said.

Wild Birds Unlimited is considered a niche store, Bruce said, but once people see the food and supplies they can get there, “They just keep coming.”

The food they sell can attract pretty much any bird that local bird-lovers can think of, “and the nice thing is, it’s all fresh.”

There are no fillers, his wife added.

To attract many common birds that people see around the Valley, such as cardinals and gold finches, the Johnsons recommend a basic feeder.

While wrens and chickadees join bluebirds in their preference for live mealworms, cardinals and finches eat seeds (among other things), and hummingbirds eat flower nectar, tree sap, insects, or pollen.

It’s also just as easy to dissuade unwanted critters to your yard with the type of birdseed or feeders you offer as it is to attract them.

Those who want to chase off blackbirds, starlings, or grackles should try using safflower seed, Bruce said. They also might try setting up a different type of feeder or putting a cage around their feeder to keep out unwanted birds or other animals, such as squirrels.

Bird watching, or “birding,” is exciting, Bruce said. And he finds his customers use various ways of keeping track of the birds that visit—such as consulting The Great Backyard Bird Count website, http://gbbc.birdcount.org, through Cornell University, which also hosts a Wild Bird Unlimited store in the visitor center of the Cornell Lab.

The couple often get a lot of people who want to talk about birds, Bruce said. “Seems like everyone has some interest.”

And customers share their experience when they come to the store, Dolores said.

“They call them ‘their birds,’” she said.

When they have questions, she said, “We try to find the answer for them.”

“It’s a good part of our business,” she explained. “We learn from them too.”